What are the advantages of using \Umathchardef over \Umathcode with \let?

I've been playing around with unicode mathematics input. I noticed that both

lead to the same behavior of \plus in math mode (assuming that a suitable math font has been assigned to family 0).

What are the advantages/disadvantages, if any, of one method or the other to define a control sequence to use in mathematics input?

First, there is performance: \Umathchardef will be slightly faster (there is less indirection after all), but that shouldn't be relevant in most cases.

then your math \alpha is italic math alpha 𝛼, while your text mode \alpha is still a regular text α.

So \Umathchardef is a bit faster, has better error handling in XeTeX and doesn't introduce hidden dependencies on the mathcode of some character, but \Umathcode and \let are more flexible and might be shorter if you set the \Umathcode anyway.

hyperref won't like it if you \let a command to a char. It is tricky to detect such commands and the hyperref code currently can't do it (this will perhaps change but not directly). There are a number of bug reports at the hyperref and unicode-math github about this, e.g. https://github.com/latex3/hyperref/issues/63 and https://github.com/wspr/unicode-math/issues/532. Instead of using \let it is better to use \def (\newcommand).

In the bookmarks you will see differences too. The \Umathchardef variant is currently lost (this will perhaps change too but also not directly).

Compiled without hyperref and with the commented part: 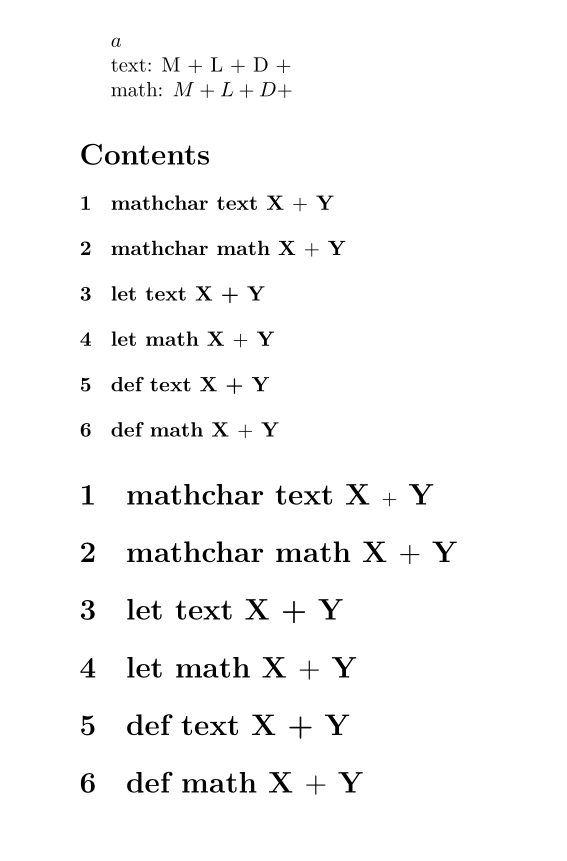 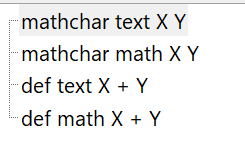 We can check the difference of these two assignments in the log:

The fundamental difference is that with \Umathchardef\plus you get a token that represents this particular math symbol in the output, whereas with \let\plus=+ you make an alias for the + character in the input.

Another problem with the second variant is that it is non-local, i.e. the assignment of the mathcode and the definition of the control sequence do not take place in the same statement.

Also, the first statement is how it is meant to be done™. From the TeXbook:

unicode-math uses the second approach for almost all symbols, as you can check (see Henri Menke's answer):

So if you use Lua- or XeLaTeX the work is already done and you do not need to do it by hand. The best argument for this approach is that your code will be much more readable by avoiding many macros. Compare:

As you try out the \Umath... commands I think that you consider unsing Plain Lua/XeTeX. In this case you have to do (or correct) it by hand as Lua- and XeTeX set the following \Umathcodes:

Then you have to write many lines for all the symbold you need. I did this some time ago as I like PlainTex. Here are some examples (my math font is in \fam1):

Not the answer you're looking for? Browse other questions tagged xetex luatex or ask your own question.

42
What are the advantages of Lua over other scripting languages for a TeX implementation?
30
What are lccode and uccode used for?
9
Giving arbitrary unicode characters, passed as arguments, a math-active definition?
19
fontawesome icons are getting too big using XeLaTeX
66
What are the incompatibilities of pdftex, xetex and luatex?
5
lualatex-luatextra math mode issue