How does `\discretionary` work?

In poking around in someone else's package, I found the \discretionary command being used quite a lot. I wanted to hook into the code being used in one of its arguments, but found that my code got executed rather a lot more than I was expecting. My conjecture is that \discretionary behaves a little like \mathchoice: each argument is processed into a box, one of those boxes is typeset into the document and the others are thrown away.

Is that the case?

(What I'm trying to do is step a counter when a particular one of the arguments is used. As this is an assignment, it would appear that the counter is stepped every time \discretionary is used. In similar circumstances, I've used a trick using the aux file to see which box is actually processed. I was wondering if I could avoid that here.)

If you use luatex you could traverse the nodes in the post_linebreak_filter callback, but looking at classic TeX...

and each of a,b,c,d is set in a box but only one of the boxes is copied to the final page and so by placing non immediate writes in each box, you can see from the output which is used.

only one of A B C D will be written showing which box is used.

The situation with discretionary is superficially similar

but the arguments are not normally boxed. You can use a box, but normally they are just characters and they are restricted to characters, boxes and kerns, you can not have write nodes.

So you can have immediate printing that does not generate a node:

But neither of these forms gives you any information as all three arguments are evaluated so you get 1 2 3 and a b c respectively.

You could try a non-immediate \write but then you get

So you could put the write node in a box

is error free and just outputs C as no line break happened, however this means that the horizontal list contains \hbox{c} not c which will disturb any ligatures or inter-letter kerns.

(No help to what you're ultimately trying to accomplish, but just to answer the question literally as asked.)

Recall that \discretionary is supposed to be used as

where the ⟨no-break text⟩ is what is printed by default, but if a line needs to be broken then the current line will end with ⟨pre-break text⟩ and the next line will start with ⟨post-break text⟩. This is explained in The TeXbook page 95 (Chapter 14: How TeX Breaks Paragraphs into Lines).

How it works internally is that TeX inserts a "disc" node into the current list. For example, if you type

Here you find a st\discretionary{ra-}{ng}{rang}e word.

(note the kerns and “fi” ligature too—got the above using LuaTeX's pre_linebreak_filter as here). To be more precise, what the disc node points to are themselves lists of course: 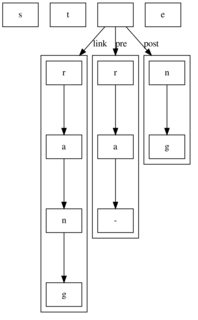 To go into even more low-level detail:

When TeX encounters \discretionary, if it's in vertical mode, then (just as when encountering a letter or \hskip etc) it first backs up and starts a new paragraph (thus switches to horizontal mode). (See p. 283, "Chapter 24: Summary of Vertical Mode" of the TeXbook, or §1090 of the program.) So we can assume that TeX is in horizontal or math mode when it encounters a \discretionary.

So when it encounters \discretionary, it does the following:

The three general texts are processed in restricted horizontal mode. They should contain only fixed-width things; hence they aren't really very general in this case. More precisely, the horizontal list formed by each discretionary general text must consist only of characters, ligatures, kerns, boxes, and rules; there should be no glue or penalty items, etc. This command appends a discretionary item to the current list; see Chapter 14 for the meaning of a discretionary item. The space factor is not changed.

Not the answer you're looking for? Browse other questions tagged tex-core discretionary or ask your own question.

11
When does a glue node have type `xspaceskip` in LuaTeX?

22
When can one use implicit braces instead of explicit braces?
21
Hyphenating hyphens: how to change the default \discretionary
64
\let\foo\bar vs \let\foo=\bar (let with equals sign)
10
assign penalty to one discretionary (not all paragraph)
12
Does \expanded replace the \romannumeral trick for expansion?
2
How to change color inside `\discretionary` with luacolor?
7
Which tokens does TeX not use as undelimited arguments (unless between { and } )?