I have the following TikZ code:

which produces this image: 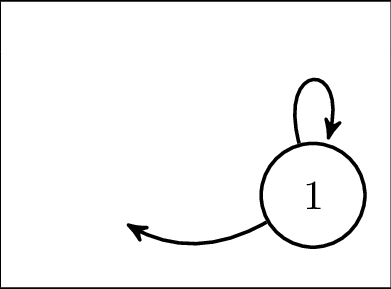 Notice, that I've used a hidden node (d1) above in order to produce the nice arrow going to the left.

The sadness of this is that now I have a big circle-sized empty space.

You can use a \coordinate instead of a \node:

To compensate for the arrow tip shortening, you could use

in the above code.

You could also use the ++ option to specify go left 2 centimeters from the last position : 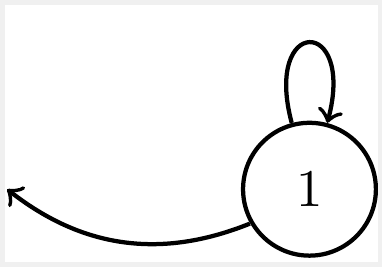 A compact code is

The actual problem here is, that the invisible node (draw=none) is only used to place the arrow as if there is an actual node. Which works fine but also expands the bounding box.

But there is the special pgfinterruptboundingbox environment. From the PGF manual, 69.3.2 “Graphic Scope Environments”, p. 568f.:

To quote from the question:

I'd like the arrow to look the same, but I'd like to get rid of that empty space.

Is there a way to draw the arrow without introducing the invisible node?

Yes, see the other answers.

Or is there a way to crop the figure?

Yes, there is an additional way: the \clip (\path[clip]) command/path operation, but that has two disadvantages:

What's an elegant way to solve this problem?

(Note, that the arrow is shorten by 1pt and the resulting .png has an additional border of 2pt, hence the arrow does not touch the picture’s margin.) 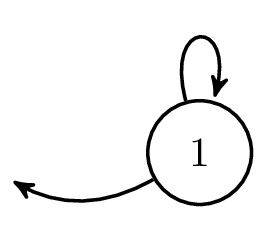 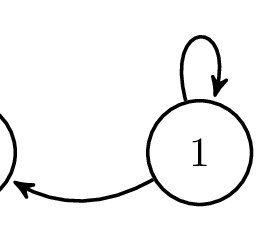 In the case of your MWE, a simple solution uses the overlay option:

Not the answer you're looking for? Browse other questions tagged tikz-pgf automata or ask your own question.

2
How to create a Markov chain with an empty node

5
TikZ library automata using option double with shorten
3
How to avoid superfluous space in the initial state of a tikz automaton
16
Numerical conditional within tikz keys?
1
How to add arrow from text to node?
12
Drawing rectilinear curves in Tikz, aka an Etch-a-Sketch drawing
9
Line up nested tikz enviroments or how to get rid of them
2
How to separate parallel edges and remove start in automata in Tikz?
1
How can I have TikZ automata accepting nodes be the same size as nonaccepting nodes?
3
Arrow between BTrees
3
Document header with tikz