I'm writing a book document with large font chapter/section/subsection titles that often get pushed into two lines. When that happens, it (logically) just pushes the word that doesn't fit into the first line anymore into the second line. While proper for regular text, within titles that creates an off-putting balance where the first line of the title is much longer than the second one.

I would like to tell LaTeX that if it has to use multiple lines, it should populate the lower lines first so that the bottom line will be longer than the ones above.

I want it to be

I'm writing it as a template/class, so I won't necessarily know what's going to be in the title, so manual linebreaks aren't convenient.

You probably want something like styleB as used in 5 and 7. This is like \raggedright but restricts the amount of stretch on the last line. 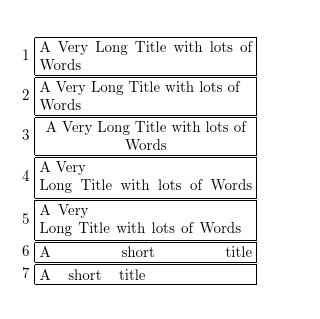 Not the answer you're looking for? Browse other questions tagged sectioning line-breaking or ask your own question.

13
How can I force long chapter names (including page numbers) to stay in the margins on the table of contents?
10
Layout for longer chapter title in Memoir class
11
How to center chapter, section and subsection using memoir?
3
Add texte before headings numbers (KOMA)
1
Align section titles in margins properly
4
Centering the section headings, but having the multines horizontally aligned wrt to the first line of the title
1
Different spacing between title, subtitle and text, and subsection text alignment
1
Avoid explicit title line break in acmart generated reference format