Why do German umlauts and sharp s (ß) work without a package in LaTeX?

I am used to the fact that LaTeX will only know letters like ä, ö, ü, or ß if I use packages like

Today, I tried LaTeX on a Mac for the first time, using the MacTeX distribution and texmaker. Without writing down any packages, all umlauts and ß were accepted correctly from scratch. Why is that and will the usage of special letters without using the packages cause any problems? 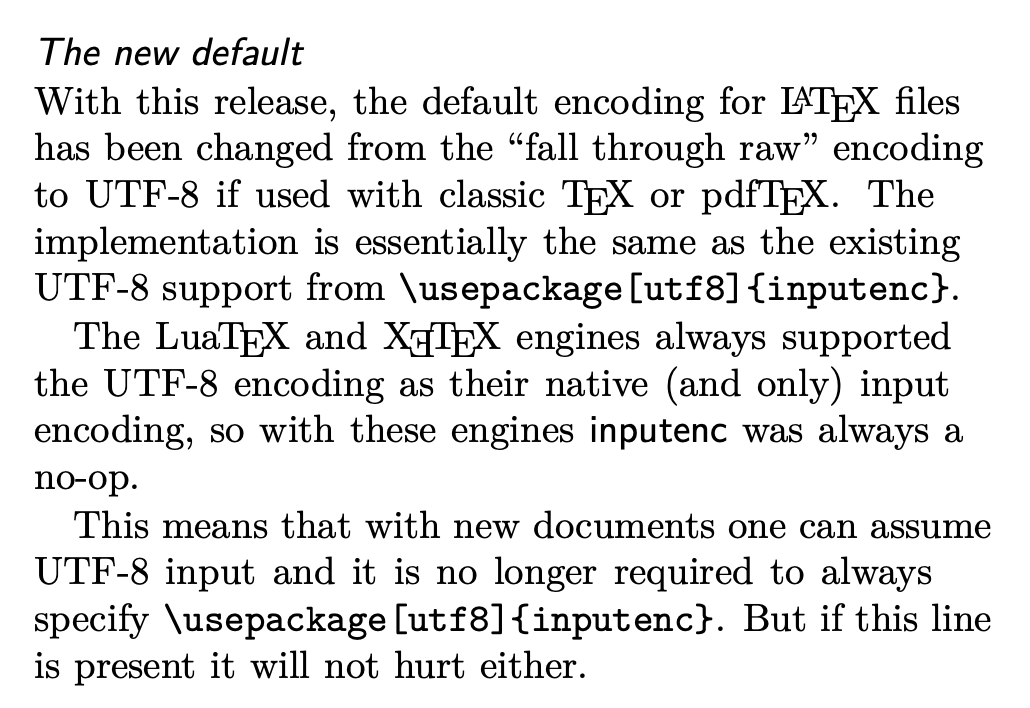 Thus calling \usepackage[utf8]{inputenc} at the start is no longer required. If a file has a different encoding than UTF-8, the proper encoding should, of course, be declared.

The utf8x add-on, together with the ucs package, used to be needed for some special application or, mostly, for typesetting Greek. The situation has very much changed and utf8x should be avoided (also ucs) as it has been unmaintained for several years and utf8 (the default) behaves much better.

On the other hand, loading fontenc is still required in order to use the T1 encoding and get better results with hyphenation of words containing accented letters or special glyphs used in European languages.

Why don't manuals and guides mention this? Because inertia prevails. :-(

Not the answer you're looking for? Browse other questions tagged packages languages input-encodings or ask your own question.

11
German Umlauts in BibTeX
1
How to make a given thesis template compatible with German umlauts (error with Unicode char)
6
How to have special characters (e.g. german umlauts) inside bibkeys?
0
Why does applemac inputenc not work anymore for umlauts?
0
How to handle german umlauts (ä,ö,ü)
1
German Umlauts in US-ASCII encoding
2
Latex graphviz package does not accept umlauts
2
bilingual slides: beamer, comment package and non-ascii characters (umlauts, diacritical characters)
2
German letters with double umlauts?
1
Addition (+) symbol is not showing after compilation