I am trying to replicate a diagram in a paywalled article and I'm having problems. It's using repeated curly brackets to demonstrate a hierarchy. But, because the ideas at each level in the hierarchy are not the same number of text lines, sometimes the curly brackets are not symmetrical around the y-axis. I have tried to reproduce some of the diagram structure here poor hand drawing of part of the diagram 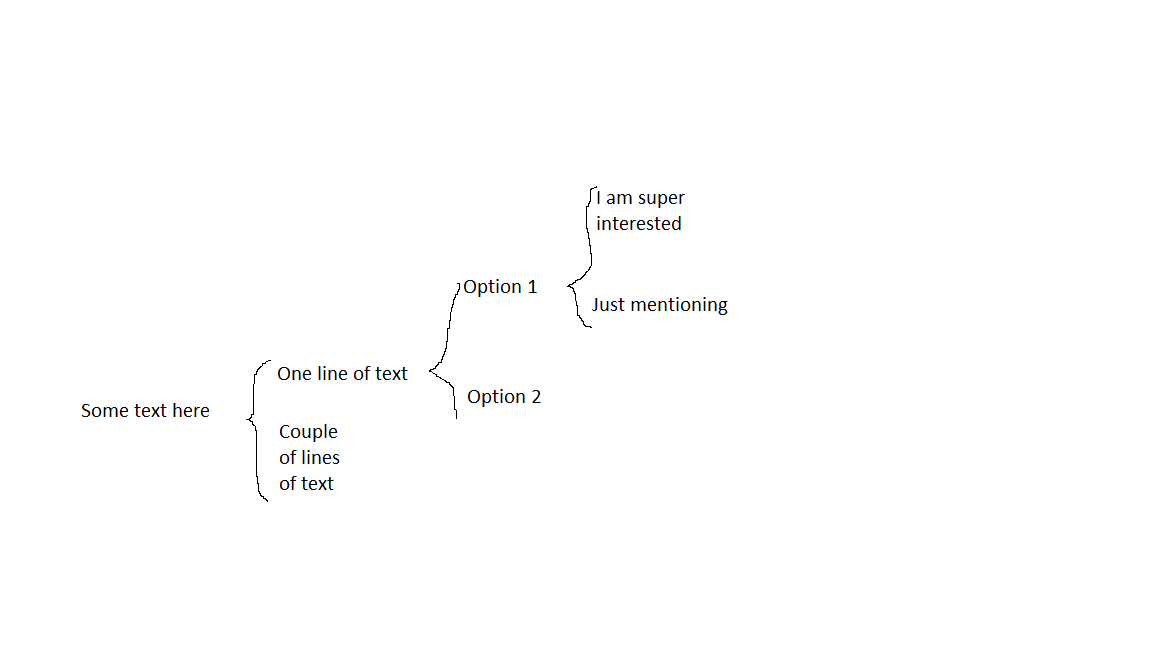 I have tried to position the text from right to left, and I'm running into problems with getting 1. the bracket lengths on either side of the < to be the length they should be, and also to get the bracket and text positioned correctly on the right of the bracket.

Which gives me this image (I haven't tried the rest as I can't get this first bit right):

How do I get the bracket part lengths correct? As you can see, I'm also struggling with getting the left hand text placed correctly relate to the right hand text. The spacing between the upper and lower options in the bracket is a function of the upper and lower text to the right. That is, the spacing between one set of bracket options must fit the lower option of the later set of brackets. I've tried to show that in my hand drawing. Particularly where "Option 2" sits relative to the previous bracket options' vertical space ("One line of text"--"Couple of lines of text").

EDITED SECOND: that wasn't an example. :( An example would be Cake. Then "Big cake" and "Small cake". Then under "Big cake" there would be "Square cake" and "Round cake". And so forth. But they are all cake.

EDITED THIRD: I received an error, so tried the example and got a somewhat different error (probably because it has less expansion that the one I am trying. This is the error, line 103 is where \end{forest} sits. I thought the centre command might be the problem so I commented that line out, but the error remains. I have this inside a \figure argument, which also contains the caption, could that be part of the problem?

Here is a forest solution. You only need to add the data in the form

The alignment is fully adjustable, and the tree will always make space for new branches.

ORIGINAL ANSWER: I think you only need to work your way from right to left.

Not the answer you're looking for? Browse other questions tagged tikz-pgf vertical-alignment brackets decorations or ask your own question.