The following piece of eye candy:

was produced using the following code:

(for the blurred shadows, you have to get the pgf-blur package from CTAN. Otherwise just change blur shadow to drop shadow)

The code for the grid, ellipses, and arrows is completely independent of the perspective transform. That is handled by doing nasty things to the low level \pgf@pos@transform macro. So far so good. But...

Any suggestions about how to do this properly? Maybe with a decoration?

I have some code that I wrote to do a slightly more "proper" handling of 3D coordinates than TikZ currently does. Amusingly, it's in the TeX-SX launchpad package already despite not (until now) being part of an answer. It's the tikz3d.dtx package. The idea of it is twofold:

The big drawback is that, as with TikZ, this only works on the coordinates, not on the actual paths. However, to properly transform the paths would involve quite considerable work because, for example, the perspective transformation of a bezier curve is not a bezier curve. Since the output formats of TikZ can only handle at best cubic beziers, one would need to approximate the projection by a family of bezier cubics.

On the other hand, the perspective projection of a straight line is still a straight line and it takes quite a considerable perspective effect to deform a bezier curve significantly away from a bezier curve. Here's a couple of examples: the curves are done by projecting the coordinates and then drawing the resulting bezier curve. The jointed-up dots are what the curve really ought to look like (sort of). As you can see, there's not a lot of difference. 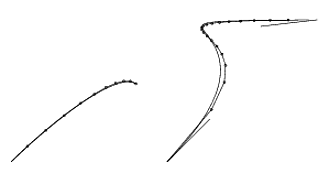 The basic shapes do need some modification to take into account the 3D coordinates, so I've got some methods for doing that. Circles and arcs don't need much modification, but for the rectangle I made a to path to handle it.

Here are a few more examples (from the file tikz3d_test.tex in the TeX-SX launchpad project). 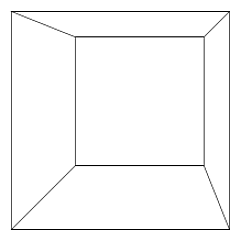 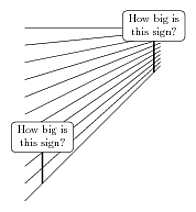