How do I insert asterisks to start a line of pmatrix other than the first?

This produces () with no asterisk. I find that if I do the following:

then I get what I want. Why is this so, and what is the correct way to get an asterisk as the first entry in the second line of a pmatrix?

In general, the \\ command accepts a *-variant and an optional argument to add vertical spacing after the new line.

However, in amsmath environments, placing the * on a different line than \\ will not interpret the asterisk in the way explained above. 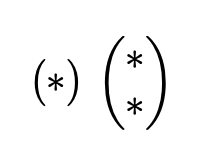 If you want to input the matrix in one line, you have to somehow separate \\ and *. A \relax will do, so

will print the matrix exactly as the second one in the image above. Blanks won't do, instead.

The same problem would present if you want to start a matrix row after the first with [.

Not the answer you're looking for? Browse other questions tagged amsmath matrices or ask your own question.