I'm using ctable and I would like to have a frame around tables matching the main color of the document. The problem is that ctable has the property framefg that accepts the RGB values of the color, like so

This while very nice does not allow me to simply put framefg = red for example. The following is what I would like to be able to do:

In the resulting PDF below the table there appears

while the error given is

basically answering my question as to why it doesn't work. I then tried (naively since I didn't really know if it would work) to redefine @CTframefg to my color like so, in the preamble

and commenting out the framefg option in the \ctable call earlier. The document compiled succesfully but the frame color was the default black, not the one I was expecting.

Are there any workarounds to this? I really would like to use a named color since I am trying to create a template for many documents, where I would just need to change the one definition of maincolor and have the whole document follow it.

You could add such a key. 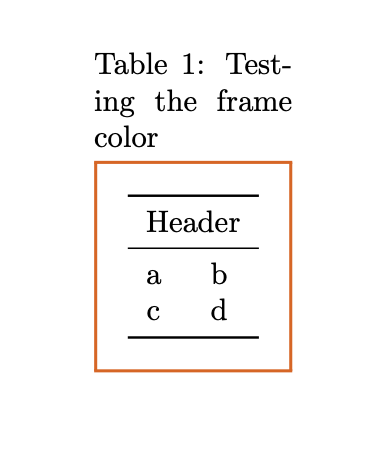 Not the answer you're looking for? Browse other questions tagged color ctable or ask your own question.