Pass and use argument as is

I'm trying to pass data that contains (and needs to keep) newlines and all kinds of special chars (like ä, $, ", \, ...) to a command. The idea is to then write the data to a file, run it through an external parser which creates a picture and to finally include the picture. This would allow all kinds of languages (that can be parsed to a image or PDF or so) to be written directly in a LaTeX file.

I've got it to work except for the special characters which got me wondering:

If you were not asking for a command/if an environment would be suficient, I'd suggest the filecontents*-environment from the LaTeX 2ε-kernel.

With LaTeX-releases prior to Fall 2019 the filecontents*-environment could only be used in the document's preamble and did not overwrite existing files.

But there is the package filecontents which removes these restrictions by providing the same environment(s) in a way where usage of the environments is not restricted to the preamble and where existing files will be overwritten.

So you can use the filecontents*-environment for creating temporary files which can be overwritten right after reading them back via \input/\include/\read/whatsoever or after having them post-processed by other programs whereby post-processing can probably be initiated from within the (La)TeX-run by means of TeX's \write18-functionality.

Some explanation of the \write18-feature can be found on https://www.texdev.net, written and maintained by Joseph Wright.

When it comes to using more recent LuaTeX-based engines where the \write18-feature is not available by default as these engines provide means for implementing it, the shellesc-package might be of interest.

If you wish to create files with images in .eps-format and to use the .eps-files in \includegraphics of the graphicx-package when running pdflatex/xelatex for creating a .pdf-file, the package epstopdf may be of interest. That package converts .eps-files to .pdf-files "on the fly" during the pdflatex-run. With more recent TeXLive-distributions pdflatex will invoke epstopdf under the hood when \includegraphics is used for including an .eps-image. With other TeX-distributions epstopdf may need to be loaded explicitly after graphicx .

I currently use pdflatex from TeXLive 2019 where .eps-to-.pdf-conversion is done under the hood on the fly automatically, so on my system the example compiles without problems.

If you save the example as test.tex, then (besides the usual auxiliary-files and .log-file) the files testPicture.eps and testPicture.lpe will be created during compilation with pdflatex. testPicture.eps is an .eps-image which can be viewed, e.g., with GSview or gv. testPicture.lpe is a text-file containing a picture-environment. Conversion of the .eps-file to .pdf will deliver a file with a .pdf-image whose name is testPicture-eps-converted-to.pdf. 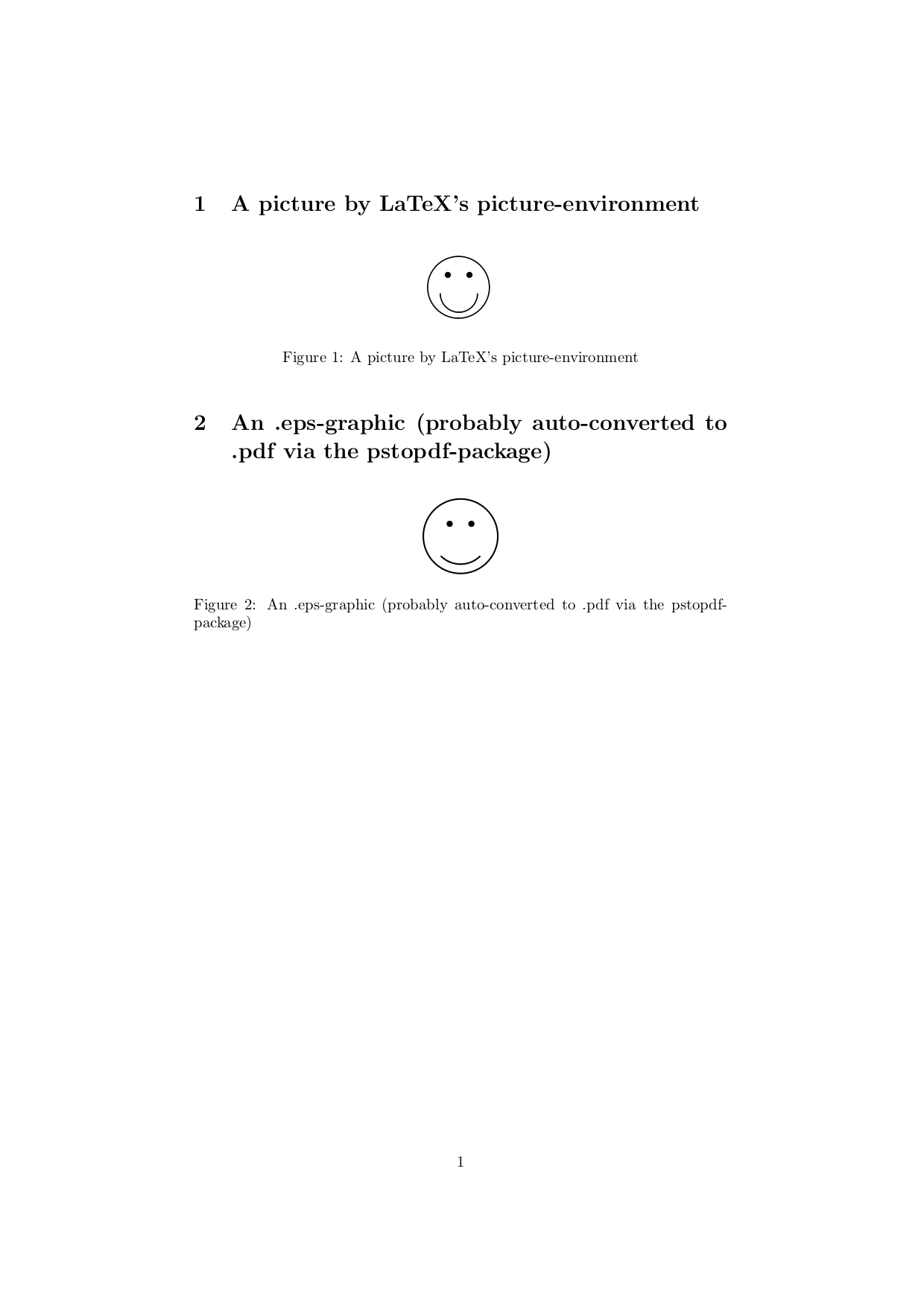 Some preliminary remarks about TeX before delivering an example of how I might go at implementing a command:

TeX takes .tex-input-files for directives for producing tokens. E.g., control-sequence-tokens. E.g., character-tokens. These tokens are appended to the token-stream. This happens in TeX's mouth. The token-stream goes down TeX's gullet. Here expansion of expandable tokens takes place. The results of expansion reach the stomach for further processing.

The crucial point is:

E.g., whenever TeX starts reading a line of input, some of the first things it does are:

Item 1 implies that writing to external file requires a routine for converting back to the computer-platform's character encoding scheme. With many TeX platforms this rouine can be configured via so-called TeX-character-translation-files/.tcx-files. On some TeX platforms/under some circumstances that routine might, e.g., be configured to deliver ^^-notation for some special characters although your computer-platform can handle these characters. This might lead to copied output differing from what was typed into the .tex-input-file.

E.g., after creating a control-word-token, the reading-apparatus is set to state S(skipping blanks) which means that subsequent input-characters of category code 10(space) will be ignored/skipped/dropped instead of yielding tokens.

Did you notice the distinction between characters in the .tex-input and character-tokens (with character code and category code) which come into being while the TeX-program is running and which get processed during compilation?

Be that as it may.

All these subtleties related to how TeX at the time of reading the .tex-input-file and creating tokens deals with input-characters depending on category codes and the state of the reading-apparatus lead to the conclusion that, if you wish to process an argument "as is", you need to switch to a category code régime where no characters of the .tex-input will be ignored/skipped/dropped during tokenization, but where each character will yield a (character-)token from which, at the time of writing the tokens to file, that very character will be regained, and where the reading-apparatus during tokenizing a line of .tex-input will always remain in state M (middle of line) and in any case will switch from state N to state M when encountering the very first character of a line of .tex-input, leading to the effect that space-characters at the beginnings of lines of .tex-input will not be ignored. (The above mentioned item 2 implies that even under such a category code régime you cannot prevent the ignoring of space-characters within lines of .tex-input that contain nothing else but space-characters.)

Another interesting question with "using/writing argument as is" is the question how to handle code that in the .tex-input-file is indented.

I fiddled together an approach where xparse's +v-argument-type (+v denotes that the argument is to be read and tokenized from the .tex-input-file under verbatim-catcode-régime) is used for reading/tokenizing the argument, so that

and where writing is done via a token-register whereby unwanted expansion of active characters is suppressed:

The \verbatiminput*-command of the verbatim-package is used for displaying the contents of these text-files. 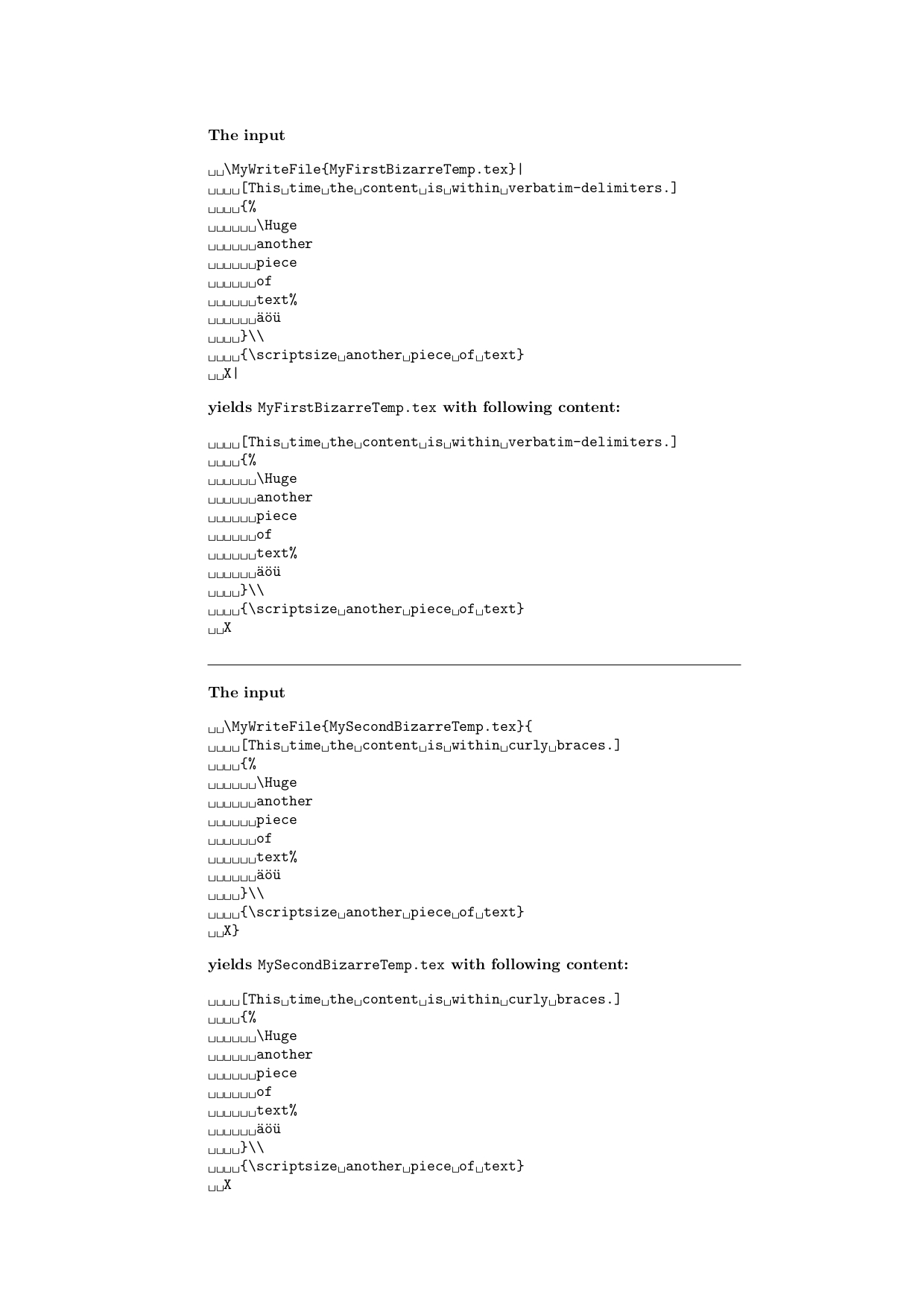 Not the answer you're looking for? Browse other questions tagged macros arguments or ask your own question.