When loading the roboto pakage with light font as default, temporarily switching to a different font weight causes siunitx to fail to detect the correct font.

There seems to be some trouble of siunitx detecting font weights, when additional weights come into play, like here or here. In this case, however, I cannot understand the issue, since I change back to the default m weight that siunitx should understand. What's the issue here?

The problem is that the code of siunitx tries to work in math and text mode in a similar way. In math there is basically only normal and bold and so also in text mode siunitx more or less only tries to detect if bold is active and if not it uses the normal series, which means here the light font. One way to get around is, is to locally reset the default series. The following examples needs a current LaTeX 2020-02-02: 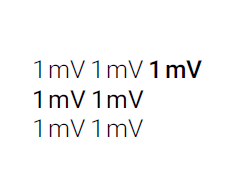 There is another problem hidden here: siunitx detects bold by looking if the current series is b or bx. But with your setup it is bx for the roman font, but sb for the sans serif, and so detecting the weight in sans serif fails:

which I might add in one way or the other in the next release.

Building on Ulrikes answer I want to expand her solution and also give a bit more background, what's going on here, since a number of different things are involved that complicate the situation.

First, it's worth mentioning that siunitx can operate in two different modes, nameley mode=text and mode=math. The siunitx manual says the following about this option.

The modeoption determines whether siunitx uses math or text mode when printing output. The choices are math and text. When using math mode, text is printed using a math font whereas in text mode a text font is used. The extent to which this is visually obvious depends on the fonts in use in the document. [...] This option has no effect if the detect-mode switch is true.

Here, I only discuss the mode=text case, since Roboto is a text font and no math font anyway. For mode=math a similar approach should be possible.

Since the font weight needs to be detected, we need to know what the current weight is that is stored in \f@series. For the Roboto font, this mechanism was recently changed. For example, in the package version of 2019/04/19, bold font with the medium option is defined as

which lead Ulrike to state that a current LaTeX version is needed. In a similar way, a number of explicit words like light or thin were changed to shorthands like l or el. This does not really cause problems for the solution to follow, but it means that it needs to be adapted to the package version.

I first address the issue of regular weight not being detected, then I turn to the problem with bold text. Ulrike stated that siunitx only tries to find out, whether bold is active or not, but doesn't check for additional weights that a font may provide. So let's have a look at the check that siuntix performs in text mode.

So why is the output wrong after switching to medium Roboto? It turns out that in order to set number and units in sans, siunitx invokes \sffamily. Now when medium weight was selected by \fontseries{m}\selectfont or \mdseries, then \sffamily evaluates to \mdseries@sf, which gets defined as

when the roboto package is loaded with the light option. So that means that \sffamily actually explicitly switches back to light weight and produces the wrong output. I'm not quite sure, which package to blame here, since for both siunitx and roboto individually, their approaches appear plausible, but in combination it's causing trouble.

One possible solution is given by Ulrike by (locally) redefining \sffamily, e.g. by using the convenient command that she gives.

Another option is to (locally) tell siunitx to use a different command to setup sans fonts using the siunitx option text-sf (or number-text-sf and unit-text-sf) that is undocumented as far as I can tell.

The problem with bold is that the medium option of the roboto package sets up semibold and that the corresponding sb, well, just doesn't start with letter b. The only way I see here, is to patch the test \__siunitx_detect_font_weight_text:.

This approach is similar to this answer, but evidently is not very reliable. As stated in that answer and by Ulrike in her comment, it's generally not a good idea to fumble around in internal commands of packages. The implementation or even the name of \__siunitx_detect_font_weight_text: may change with future versions of siunitx and then the patch has to be corrected accordingly.

This patch uses the \apptocmd functionality from etoolbox. Note that there is an issue on GitHub that asks to add this very functionality, so hopefully, this patch will be obsolete in the future.

Finally a complete solution that combines all of the above may look as follows.

This solution now respects the weight for all three cases. If more of the weights that the roboto package offers are needed, of course more changes along these lines may be necessary.

Not the answer you're looking for? Browse other questions tagged fonts siunitx or ask your own question.