I'm using KOMA-Script with pdflatex (might want to switch to lualatex eventually) to typeset my thesis and want to use EBGaramond as a font. To this end I am loading the ebgaramond-maths package, which in turn loads the ebgaramond package. The latter offers various styles of the font, including different number figures. I really like the default old-style figures in the body text, but I don't think they lend themselves too well for headings. So I want to change the number style only in the headings and TOC. The ebgaramond README gives us the following ways to choose a style:

To use, add \usepackage{ebgaramond} to the preamble of your document. Options include:

[…] Commands \oldstylenums{...} and \liningnums{...} are defined to allow for local use of old-style figures or liningfigures, respectively.

Changing the style globally is not an option, so we're left with using \liningnums{}. How do I use it correctly with KOMA-Script?

(\rmfamily because I want serif style headings). This works for \chapters but not \sections in the MWE, but it doesn't work in my actual document and throws

I don't know what's messing with it here, but it's also discouraged by the KOMA-Script documentation (section 3.6):

Sometimes, although this is not recommended, the font setting of an element is used for settings that are not actually related to the font. […] However, you should not take these commands as legitimizing the insertion of arbitrary commands in an element’s font setting. To do so can lead quickly to errors (see section 21.5, page 476).

But this doesn't work either. When I only set \chapterlinesformat it works for \chapters but messes with the font styles. In the TOC, the \chapter font is set to sans-serif Computer Modern, while \section and \subsection is left at serif Garamond. In the main document however it's exactly opposite: \chapter has the correct lining figures and is correctly typeset in Garamond, but now the \section and \subsection are in sans-serif Computer Modern. If dare to add the sectionlinesformat line, I get the error

How do I correctly tell KOMA-Script to use liningnums{} for headings in the body text and TOC? No hacks please, I want a clean KOMA-Scriptonic solution.

You can switch the font family to the lining font: 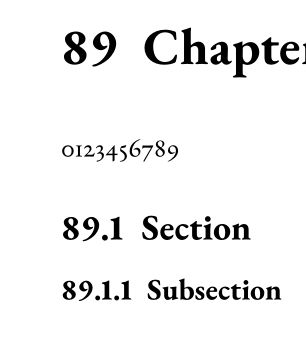 Not the answer you're looking for? Browse other questions tagged fonts koma-script ebgaramond or ask your own question.

8
How to change footnote number style
4
Using \renewcommand{\familydefault}{} to use times new roman everywhere
1
Formatting the headings
5
chapter style in toc independent from page number style
16
How to use only serif fonts in whole document?
3
Mathpazo old style numbers in text, but lining figures in tables, captions or section headings
0
tabfigures and scrreprt: tabular figures in ToC