What is the purpose of a <filler> in TeX's syntax?

Many of TeX's primitives require a <general text> as their argument (e.g. \uppercase), which is defined as (TeXbook p. 276)

where <filler> is an arbitrary sequence of spaces and \relax commands. Now I would like to find out in what way it is useful that such a <filler> can be inserted.

Could someone give an example where the presence or absence of a <filler> makes any difference, or, if such a situation shouldn't exist, explain why the fact that a <filler> could be inserted is advantageous?

Edit: In the original version of the question, I claimed that

are already made possible by the fact that the left brace may be implicit, so that TeX is expanding to find one.

Thanks to a discussion with frougon, I have come to realize that this is a misunderstanding. Here is what I currently believe to be true:

Basically it's not the case that implicit braces in the syntax rules imply expansion, but the other way around: Expansion implies that the braces may be implicit. Also, implicit braces are defined as control sequences that were \let or \futurelet to a category 1 token, not just anything expanding to one, so it wouldn't make sense to say that TeX fully expands tokens in order to find a brace as I originally thought.

This does not affect the question itself, though; it just illustrates how I was mistaking the descriptive nature of the grammar rules for a normative one.

Space is perhaps easier to justify as it makes some tex primitives that take braced arguments act a little bit more like macros where \frac {1} {2} the space token before the second brace is ignored. It is also why spaces after = in \count0 = 2 are ignored, however in both cases there are perhaps more natural places in the grammar where spaces could have been absorbed.

But to be honest it mostly looks like an early syntax idea from the start of the TeX design that doesn't really make sense the way TeX finally came out.

Quite often the tex source (tex.web) is more informative than the texbook for this sort of thing but the word filler does not appear and all it says that I can see is

which doesn't give much of a clue as to why \relax is allowed.

The grammar given in The TeXbook documents what the program (TeX) does, rather than the program being written to match a specific grammar. (Although I can't definitively prove this, this is fairly clear (IMO) from looking at both; also consider these stories.) So as pointed out by David Carlisle's answer, the relevant part seems to be scan_left_brace in the TeX program's source code (available as a book, with texdoc tex, or online): 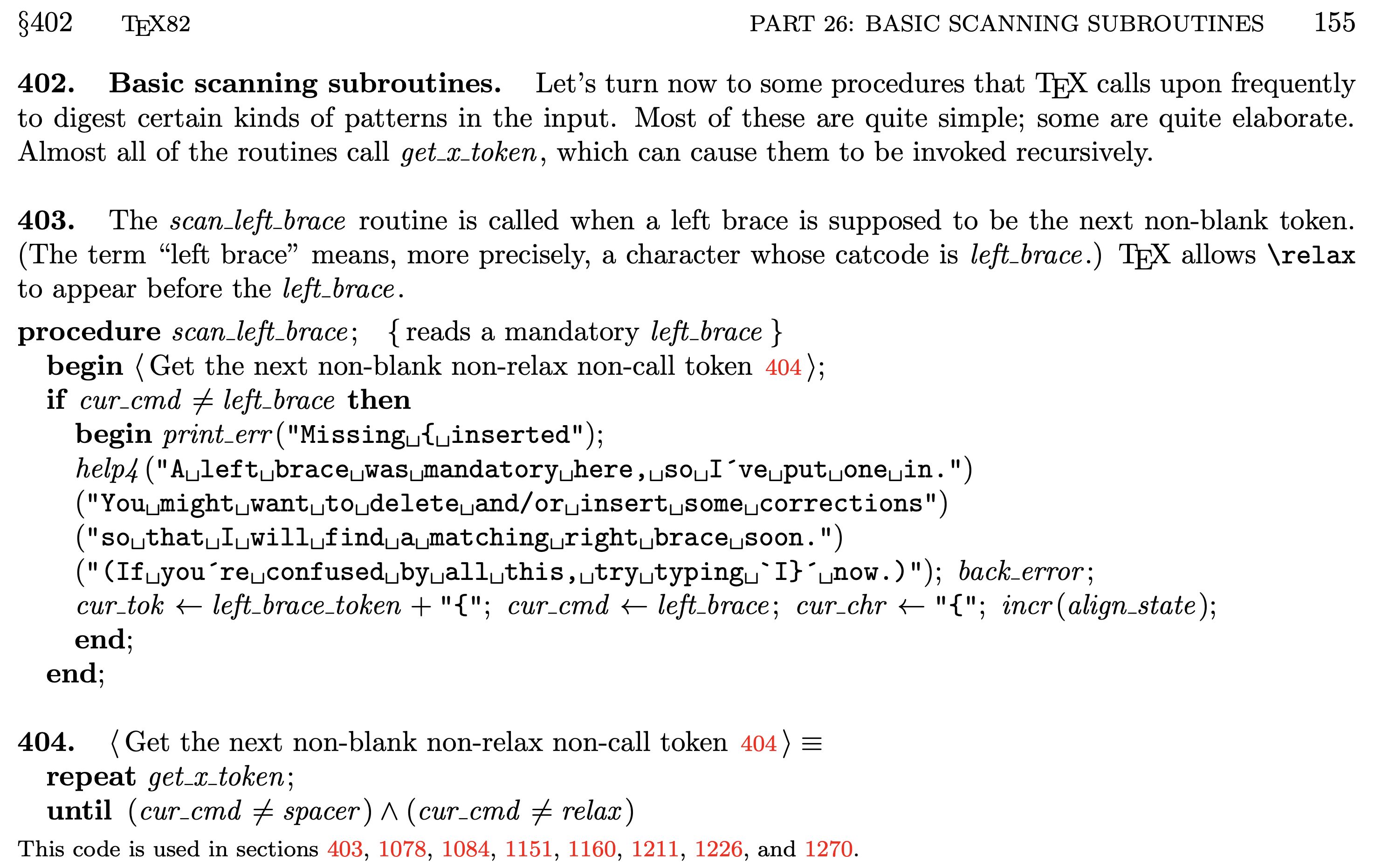 So your question seems to boil down to why scan_left_brace (as called from scan_toks, which is called when acting on \uppercase etc.) ignores both spaces and \relax tokens. Some clues are available in TeX's change log (available with texdoc errorlog or online) (to make sense of it see also Notes on the Errors of TeX and the paper The Errors of TeX, reprinted with additions and corrections as Chapters 10 and 11 of Literate Programming). If you look for the relevant sections 403 and 404, you see:

I think this may give some clue towards the question (if I understood it). At least for spaces, there are many examples for which it makes sense. When it comes to \relax, note that just like the §404 "Get the next non-blank non-relax non-call token" there's another §406 "Get the next non-blank non-call token" where \relax is not ignored, and it's used in another bunch of places (like scan_optional_equals). So you might ask why each of those places chooses to ignore \relax rather than not, and it may be hard (for me) to explain each of those choices (though it must have been a conscious choice as it would have been so easy to choose otherwise).

Based on the helpful answers by David Carlisle and ShreevatsaR, I have a tentative suggestion to make:

If TeX expects a specific syntactical quantity, it ignores \relax tokens unless there are good reasons not to ignore them.

Let me demonstrate this by evaluating in which situations a \relax is ignored (after possible expansion) and in which it is not. First of all, here are the situations mentioned in the TeXbook where a <filler> may occur:

However, going through the list of situations where TeX's §404 "Get the next non-blank non-relax non-call token" is called (which can be seen in ShreevatsaR's answer), there are actually a few more, that as far as I know are not mentioned in the TeXbook:

By looking at the syntax rules, I can only find a few situations in which a \relax actually is not ignored or even disallowed:

And here are the good reasons I can think of for each of those points:

To summarize, it seems to me that if some specific syntactical quantity is expected, \relax is ignored if it could not act meaningfully as a delimiter.

Not the answer you're looking for? Browse other questions tagged tex-core syntax or ask your own question.

24
Get the lion to run in loops. Tersely

22
When can one use implicit braces instead of explicit braces?
18
\jobname, character codes and \detokenize
8
reversing the order of expansion
81
Why isn't everything expandable?
15
Unbalanced output routine
74
What is a token?
6
The laws of expansion (\chardef\foo=<number>\foo)
10
Does \expanded replace the \romannumeral trick for expansion?
5
Double hashes inside macro definition?
6
Why don't unexpandable active characters work in \csname…\endcsname?