conditionals inside newcommand with empty argument

My idea is that when I write \reason{input}, if input is nothing (literally empty: \reason{}) then \reason does nothing, else (this is: input = whatever you like to write, including text and inline math mode) \reason does exactly the same as if it were \textnormal{(input)}.

and I want to get

I think that the main problem here is what is inside of \if...\else...\if, though I also do not know if it is possible to define a new command with conditionals, but as when I compiled it, there was no error, I think I can do that.

I would also like to set an empty default value.

Could you please help me to define well my command?

First, your function is not employing an optional argument, so get rid of it. Second, use \ifx rather than \if, since you could have a non-blank argument that expands to nothing, and (I think) you do not want that to take the empty branch. Finally, I \detokenize the argument which takes care of other things, for example if the argument itself were \relax.

If you want default behavior for the empty-argument case, add the code just prior to the \else in the definition. 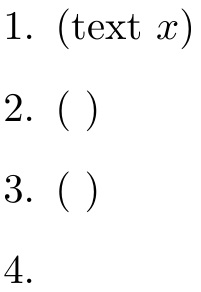 Here's another way to implement the Default answer for an empty input:

you are defining \reason to take an optional argument, due to [] after [1]. You seem to want an argument in braces, so first of all you have to remove [].

However, this is not sufficient. Your code \if\#1 compares \# with 1. Since the former is a control sequence (TeXnically, a \chardef token) and the latter is a character, \if decides that the test returns false, so you get \textnormal{(#1)} no matter what.

How do you test whether an argument is empty? The easiest way is to use \detokenize.

You could als use expl3: 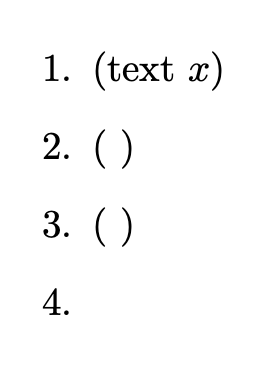 If you change \tl_if_empty:nF into \tl_if_blank:nF, item 2 would result in nothing.

Your test doesn't work as expected because \if doesn't work the way you think. \if expands the tokens in front of it until it has two unexpandable ones, then it compares their character codes. More precisely, let's quote the TeXbook (p. 209):

TeX will expand macros following \if until two unexpandable tokens are found. If either token is a control sequence, TeX considers it to have character code 256 and category code 16, unless the current equivalent of that control sequence has been \let equal to a non-active character token. In this way, each token specifies a (character code, category code) pair. The condition is true if the character codes are equal, independent of the category codes. For example, after \def\a{*} and \let\b=* and \def\c{/}, the tests \if*\a and \if\a\b will be true, but \if\a\c will be false. Also \if\a\par will be false, but \if\par\let will be true.

Now, let's analyse how it works in your macro (Steven B. Segletes and egreg already pointed out that you don't use proper syntax for the optional argument [namely, square brackets when the macro is used], I won't comment on that further):

When this definition is read by TeX, it will store as the replacement text:

Now, how does it behave according to the rules given in the TeXbook excerpt quoted above for \if?

Here are two ways to implement your macro, one using \if and \detokenize, the other using etoolbox's \ifstempty macro (the \detokenize e-TeX primitive expands to character tokens of category code 12, except spaces which come out with category code 10; the expansion of \detokenize{...} is empty if the ... “argument” is empty).

Note that in case you want to consider “only-spaces” the same way as “empty,” etoolbox has the \ifblank macro readily available.

If you want to obtain an error when the argument of your \reason macro contains blank lines (or, equivalently, \par tokens), use \newcommand* instead of \newcommand.

Not the answer you're looking for? Browse other questions tagged macros conditionals or ask your own question.

119
How to check if a macro value is empty or will not create text with plain TeX conditionals?