How to minimize the row height in a latex table

I know about the \\[...] syntax, but what is the right length to enter (actually: subtract) there (as it is depending on the font height obviously)? Can anybody tell me how the default height is constructed in tabular like environments, so I can use this formula to fill in the corresponding negative length via \\[...]?

Or is there a trick to remove the "default" strut in a cell (this is how I understand it is being done but I may be wrong as all of this how the array package constructs the \halign is way beyond my current understanding), so it collapses to whatever I put in there (e.g. a rule with a height of 2 pt or so)?

Because the understandable wish for an example was articulated I will try to explain the what and why a bit better, and give some example code that demonstrates what I want to achieve, and how this is done incorporating the solution given by Donald Arseneau.

The initial need is to typeset a table with chords and their allowed tensions, weak and strong harmonies and avoid notes. It doesn't matter if you don't get what I am talking about, just think of the periodic table of elements, this has a similar need for color and very selective borders around cells, only that in my case I would also want to vary the border thickness and border color (yes, I know about booktabs.sty - you simply have to believe me that the typographical remarks there don't apply at all to my situation.)

What I present is not my final product but still a synthetic example with an evolution of what I tried and what my current state is (with remarks given here referring to the 4 different approaches/evolutionary steps I show).

and this is the result: 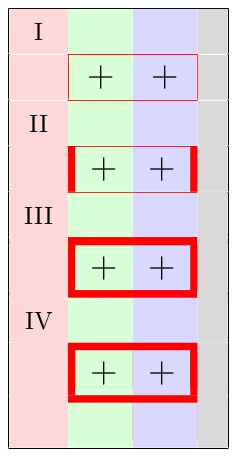 I) This is the most naive way with \hhline. Features the dreaded white space where no rule segment should be. Also no increased thickness.

II) Using correctly colored line segments everywhere in the \hhline and placing fat \vstruts via \multicolumn{1}... helps to get there partially, but I see no way to make the horizontal part thicker with this approach. And already I have the impression that it gets cluttered and an excessive effort to handle the white space correctly.

III) Using ehhline.sty and \leaders in the \hhline. Works (I think the little missing part at the right is an artefact of the pdf viewer's zooming). It simply feels like an incredibly excessive effort to reach the result, and would be completely unreadable without the defined shortcuts.

Side question: Does anybody know a more elegant way than to stick tiny rules via \leaders together here (see the definition of \crs in my code)? How could I just put in one correctly sized rule in there? Is there any way to get to the computed column width?

IV) Trying to minimize the effort, I thought about skipping \hline and related altogether and instead construct the vertical rules as regular cells. This is where the question arose. With the right amount of skipping back and adding my thickness it works.

So I have two possible ways now, but unfortunately they don't yet solve all cases. I need in one table bordered cells with differing widths. Obviously both III) and IV) assume one thickness for horizontal borders per row. So I am trying to stop using the cell itself as a rule, but instead use the cells only for background coloring and again sticking in rules for the borders (which would need to be aligned at the bottom for top borders and aligned to the top for bottom borders). But here I am back at my side question above: I would need a way to insert colored rules of the computed column width and the desired thickness into cells that hold the border. This is currently unsolved for me.

The example to provide would be a simple tabular that has the extra blank line, but which you'd like to collapse. For example, I see it would be easy to detect a completely blank row

and suppress that (ignore the row entirely), but it would not collapse things like

Anyway, and the reason this incomplete answer is entered as an answer, is your request for the explicit spacing is simple but the answer is somewhat obscure

(\baselineskip is zero while making the tabular.)

Oh yes, and if you just want to avoid the apparent line-skips enforced by hidden struts, throughout a whole tabular, just set the stretch to zero

Simply, don't use \strut when you are using \halign inside a \vbox where \offinterlineskip is set:

If you explicitly want to use LaTeX tabular environment, just deactivate \strut locally:

Your example does not show all complexity of your problems. So I don't show complete answer. I don't sure that all complicated things you mentioned are explicitly needed. My answer does not use \halign. When I will know why to use it then I am able to correct this answer (may be with \halign usage). My example shows how to do this at TeX primitive level (colors are from OPmac or OpTeX packages designed for plain TeX).

Note that the concept of macros must respect the usage of them. We can't dive to the complicated code inside tabular environment when we want to create the results. 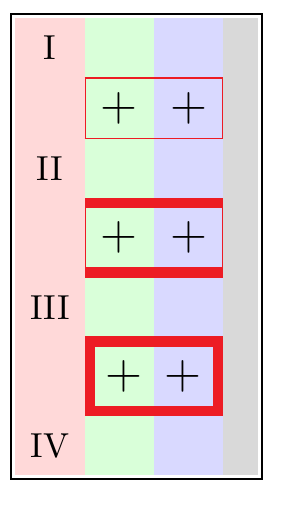