It seems to work in general. Though, you can't put any kind of text after it because it will mess things up:

So, let us say we have some arbitrary macro called func that is displayed with some variable number of arguments. So, if I called \func{a_1}{a_2}{a_3}, it would display something like

Let's say that I want func to require at least 2 parameters. So, I attempt to add the function like such:

The first argument to \checknextarg is ", " since I wish for each parameter to be comma separated. The second is simply nothing because I don't desire to append anything to each parameter. The third is ")" to close off the function.

This works as intended for 2 parameters or greater. However, LaTeX will attempt to read the text after the call to the \func macro if there are less than 2 commands put in because of the nature of \@ifnextchar. So, I was wondering if there were any ideas on how to avoid taking in arguments in cases like this.

I don't like this kind of syntax at all for reasons that have already been discussed several times in the past. One of them has to do with "expandability" of macros.

Be that as it may. 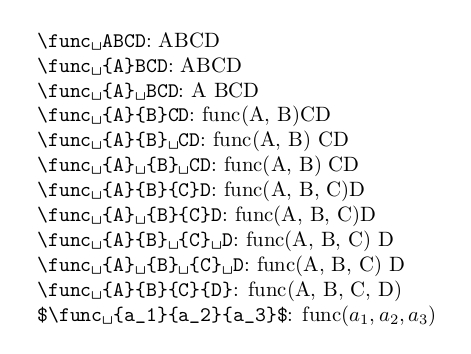 Not the answer you're looking for? Browse other questions tagged macros conditionals latex-base or ask your own question.

1
Macro that takes a variable number of arguments, and creates a table with one row per argument
1
Macro to format a list with arbitrary items