There are a lot of similar posts to this but I have yet to find one that correctly solves my issue. The tl;dr is: How do I make nomenclature produce only a list of variables without producing a new chapter?

I want to use the nomencl package to create a sorted list of variables in the first appendix chapter of my thesis. I am writing in Overleaf.

The appendix package works fine on its own. In my main .tex file, I have

My appendix files appa and appb both start with a chapter title. For example, appb begins with \chapter{Figures} which displays on the page as 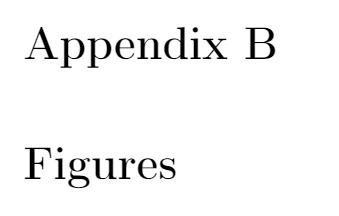 and in the table of contents as

The nomenclature package on its own works just fine. I define all of my variables and a new chapter containing a list appears where I place \printnomenclature. I only want the list though. It should appear on the page as

Because \printnomenclature starts a new chapter, if I write

in appa I end up with

with Chapter A: Nomenclature on page 55 and the list actually on page 57. It only appears in the ToC because I included [intoc] for the sake of illustration. I want everything to be on page 55 with the page itself appearing like Appendix B did in the first figure. How do I do this?

Warning: this answer may not apply to your actual needs.

IF you want to completely ignore all \chapter* commands in your appendices, and do the sectioning yourself, then you can declare

in your document preamble.

IF you want to treat those \chapter* declarations as numbered (lettered) chapters (appendices), then the incantation is

Note that these make assumptions on how the document class defines \chapter, so can't be relied on everywhere.

The nomencl makes use of \chapter*{} (if available in the class) to create the list of symbols and so a new page is created.

First, load the nomencl package with the option notocbasic (but not intoc otherwise the entry will be duplicated in table of contents), that is,

and then simply put the code above on your preamble. In the document, you simply use \appendix and \printnomenclature. 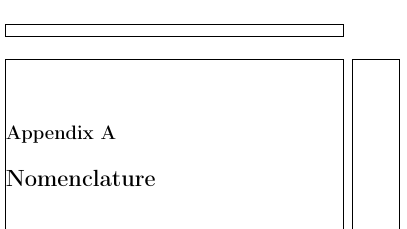 Not the answer you're looking for? Browse other questions tagged appendices nomenclature appendix nomencl or ask your own question.

4
Nomenclature as a chapter
0
Nomenclature List shown, but not in text
3
Inserting nomenclature on a page without page number
2
nomenclature page formatting
0
Nomencl and nomenclature in included PDF
3
Appendices title on first page of Appendices and not separate page
2
How can I show appendices as "APÊNDICE A – Title of the appendix" in TOC using the package `appendix`?
1
Use the nomencl and listing packages to include a command summary