I have written a book in KOMA-Script. I really trust Markus Kohm about his views on typesetting, especially margins, and I don't want to use heavy artillery such as geometry package. I set it all just using his preferred method of BCOR, DIV and so on. The result looks fabulous to my nonexpert eye, except for one thing. The top margin is really much smaller than the bottom one. (See screenshot.) 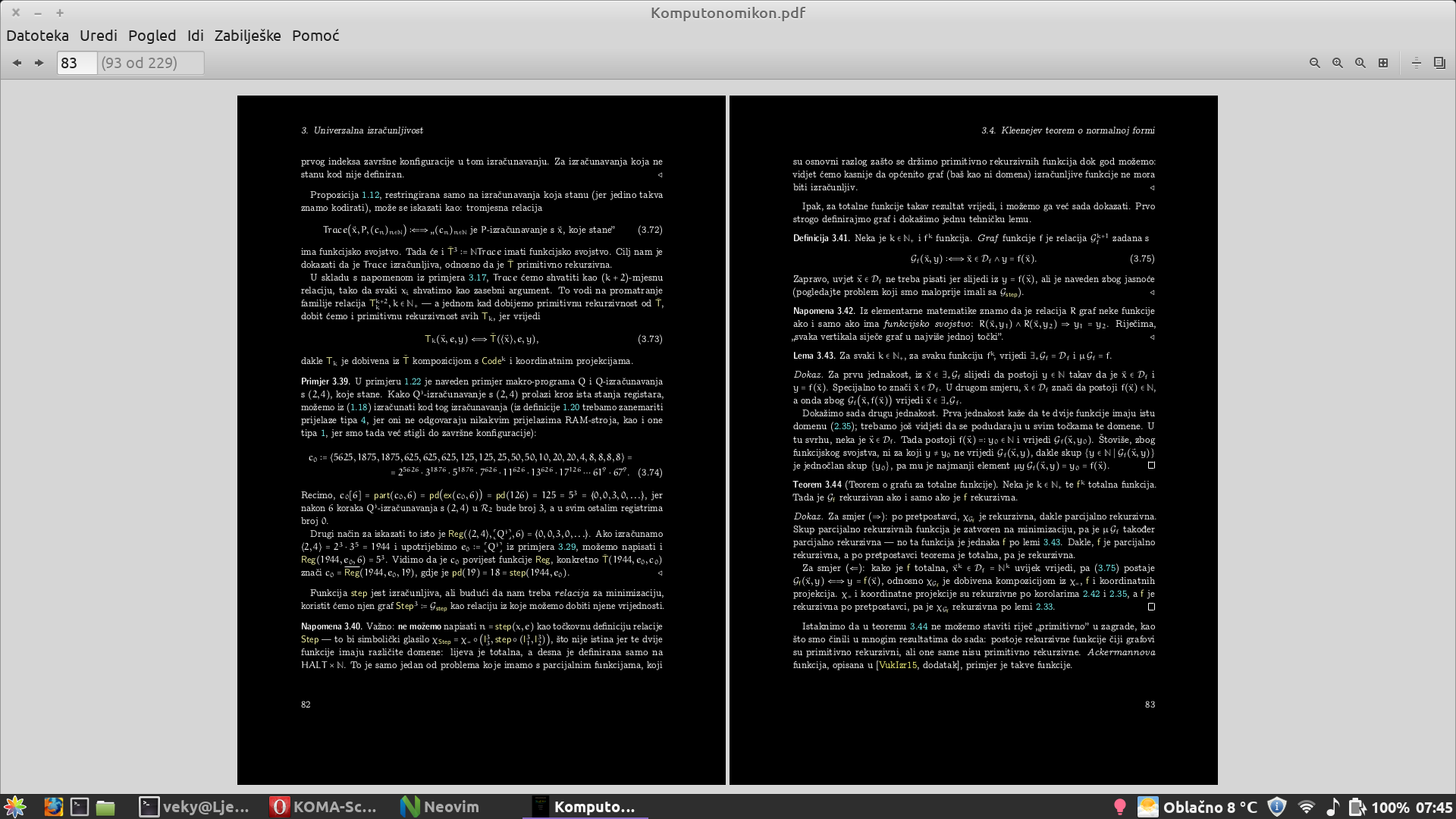 My question is, am I doing something wrong? Is it supposed to look like this? (It really looks much different than other books I've seen.) Can I do anything short of explicitly specifying margins? Yes, I know that I can include header in typearea, but then my book grows significantly (by more than 20 pages), and still the bottom margin is longer. I don't think it's worth it. I also tried moving page numbers to the header, thinking that when the footer is empty, it will shift the typearea down---it didn't budge. (I can put the running head in footer, but that looks really weird.:)

I really think that the primary problem is that the bottom margin is too big, not that the top margin is too small. Maybe there's a way to just shift the page vertically without changing the typearea height. And how big a crime changing the height is, anyway? I know that horizontal margins are important for ease of reading (line length, eye movement), space for side notes, gripping the book in one's hands and so on, but it seems nothing of that applies to vertical margins.

Here are my document options:

Thank you for helpful tips! Now some clarifications:

What you should do really depends on what you want to do. The only thing that is somewhat universal is that a line of text should not be too long. This ensures that readers can jump from the end of a line to the start of the next with ease. Markus Kohm (the author of KOMA-Script) tells us that a line should contain at most around 65 characters and a dozen words [1, 2]. (He also mentions that this limit can sometimes be stretched to up to around 75 characters, but since your lecture notes are probably not the easiest read, I wouldn't test those limits.)

So, what do you want?

I want a beautiful printed document that is easily read

Large margins help with that. You should probably just use the KOMA-Script defaults. Since your header is wide enough to appear as part of the type area, headinclude is in order. Also:

I want a readable document with as few pages as possible

It is certainly justifiable to reduce the margins somewhat in order to reduce costs and conserve resources, accepting a somewhat uglier document. Other possibilities than just reducing the margins may be helpful here. First and foremost, reducing the font size (12pt is really rather large, I would go with at most 10pt in this case). You switch to a more slender font. In order to accommodate both smaller margins and a smaller (and maybe narrower) font, you will need to use more column in order to not break the universal rule mentioned above. Maybe a three-columned landscape format is an option? (Using several columns also allows considerably smaller horizontal margins without offending the eye too much.)

This approach will of course require a bit more effort when typesetting large figures, tables or mathematical expressions, that don't easily fit in one column.

First, note that this is a very different goal from the two above. The number of pages is irrelevant here and margins don't mean the same as on a sheet of paper, because readers often don't see the whole page at once and the margin of the screen itself will surround the document. Since you don't know if your document will be the only thing on the screen or if it will be surrounded by other windows, how big the screen will be and what portion of the document will be seen at once, aesthetic considerations are pretty much impossible.

However, screen space is often valuable real estate and small screens may not have any space for margins when the text is zoomed to a readable size. Because of this, it is probably best to reduce each margin to the bare minimum and have no footer (put the page number in the header together with the running title). The document should only have one column and the margins should be the same on every page (oneside). A good example of this is the online KOMA-Script documentation [1], which would be hideous printed as is.

In order to make the document readable on small devices like phone screens, the column should probably be a bit narrower than usual (maybe around 50 characters, though I have not tested this). This will also allow readers to have the document open next to another program (e.g. a LaTeX editor, answering exercise questions). If you suspect that your students may read the document on low resolution screens, consider selecting a sans serif font (I wouldn't worry about this nowadays, though).

I want all of the above

Well, tough luck. You could of course maintain three different versions of your document (or four, if you want to optimize for both one-sided and two-sided printing), but this will mean quite some overhead, as you would have to adjust equations, figures and tables for each of them. Personally, I wouldn't want to do that.

A good compromise could be to take what you have, manually reduce the bottom margin a bit (but not too much) and recommend people print it as A5. Starting with a 12 pt font, this will result in an 8.5 pt font, which in my own experience as a student printing lecture notes, is still fine.

If you are willing to accept a little bit of extra work and want to at least have equal horizontal margins (center and outer) on the resulting page, you could prepare a second version without twoside=semi (this will leave the size of the type area unchanged, so you won't have to worry about the content) and "print" two pages per page into a PDF. (Rather than just providing the twoside version in order to prevent the common mistake of printing odd pages on the left and even pages on the right.)

Why should margins be like that anyway? Is that even widely accepted?

It is widely accepted, yes. Go to your bookshelf, pick out five random novels and have a look at their type areas. My guess is that at least four of them follow the rule that center and outer margins are equal and that the bottom margin be twice as high as the top margin1. You may also notice that those with more generous margins seem more harmonious and feel a bit easier to read. Even most textbooks follow these rules, though you will find more exceptions there.

Why is that so? Well, that's a bit difficult to answer. In my opinion it comes down to "That's just what's pleasing to the eye.". How do we know this? That in turn comes down to "Centuries of expert have found it is so, trust them." for me.

Reading about this, you will often find attempts to explain this that go something like this: When the margins chosen as described, all of the grey rectangles in the drawing below have the same aspect ratio as either a page or the double page and the top and outer corners of the type area lie on the indicated diagonals. Also, we like the golden ratio and we can find loads of ratios in this drawing that approximate it (though not very well2).

In the end, this still comes down to the same two "answers" mentioned before when we ask "Why, though?" once more, but it seems to make the whole thing a bit more intuitive for some people. 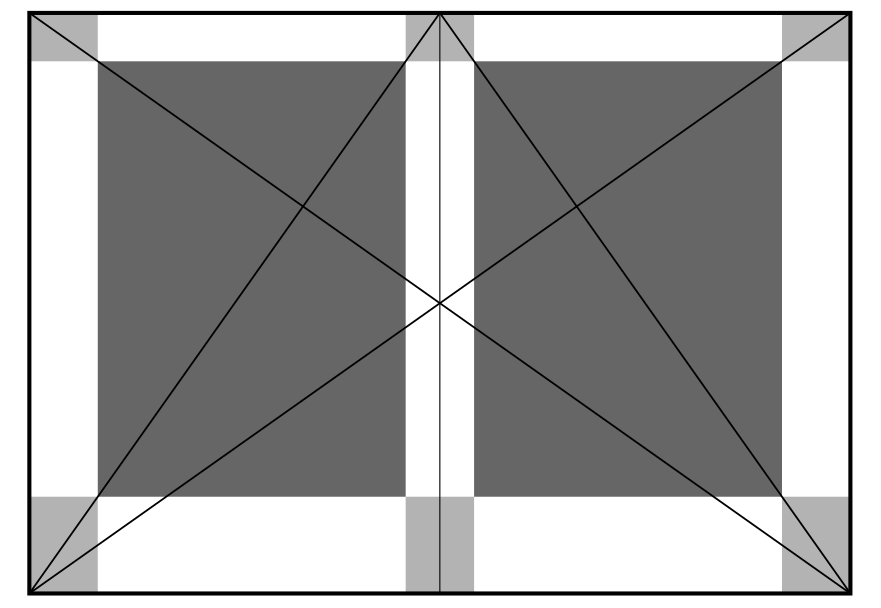 1These margins are always far from the classical ideal of having about half of the page occupied by the type area (or about a third of the page's width/height being margin), which serves to conserve both costs and room on your bookshelf.

2There are other type area constructions, of course, that choose an exact golden ratio over equal aspect ratios of the indicated rectangles.

[2]: A German article on type areas by Markus Kohm.

Not the answer you're looking for? Browse other questions tagged vertical-alignment koma-script layout or ask your own question.

20
koma-scrlttr2: bottom margin is immense, how to reduce?
1
Bottom margin seems optional to LaTeX - text alignment doesn't always go to bottom
2
A0 (landscape) sheet inside A4 paper
1
Margins change between machines (KOMA-Script)
1
How to set exact margins in KOMA-Script Report
1
How to Remove `\marginparwidth` for Pages without Margin Notes?
0
Draw margin boxes on page
0
KOMA-Script equal margins left and right with double sided