reledmac: show subline number in the apparatus of manuscripts with \msdata

I am working on a critical edition with reledmac/reledpar and I am using \msdata to mark sections of text witnessed by different manuscripts. I turned sublineation on with \startsub and \endsub for interpolations in my text, so I would like the apparatus of manuscripts to show subline numbers for those sections, but it seems it is not something that I can control with options or commands. Here is a MWE: 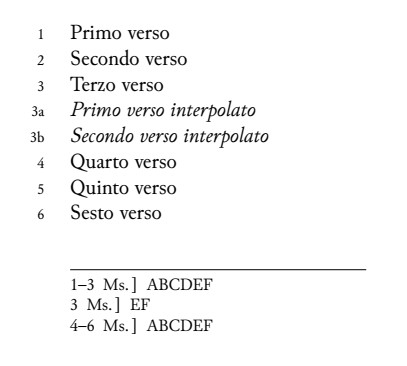 I would like the second line of the apparatus to read: 3a–b Ms.] EF.

It was a bug (more precisly, I voluntary forget to implement this feature when I start with msdata, because I wanted to have feedback before... and after that, I forget to add this feature).

However, you should add your \startsub before the &. The handbook says

When sub-lineation is in effect, the line number counter is frozen and the sub-line counter advances instead. If one of these commands appears in the middle of a line, it doesn’t take effect until the next line; in other words, a line is counted as a line or sub-line depending on what it started out as, even if it changes in the middle.

So, you should have

In your case, you get the 3,3a,3b only by hasard, as you don't indent hanging verse. Because of a misconception, in this case, the line starts when "Primo" is read by TeX, and not just after the &, as when the indent for hanging verse is set to a positive value. I won't correct now this bug in reledmac, because I am afraid with possible board effect. In any case, having \startsub& and not &\startsub is better, conceptually.

Not the answer you're looking for? Browse other questions tagged reledmac or ask your own question.