Which gives the following output: 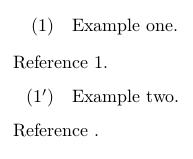 Why does not \ref{ex:2} produce a cross-reference? Am I doing something wrong?

The \exp command uses the \exi command underlyingly, and this latter command is designed for arbitrarily specified example numbers, so the regular counter system won't work (except that the argument to \exp is a label.)

Personally I think that primed example numbers are not a good idea, so I would advise against doing this. See below for some discussion. However, if you insist, you could create a \primeref command that would refer to a primed example using the label of the original non-primed example:

Then in your document you would have a label for the original unprimed example, and use \exp{<label>} and \primeref{<label>} to introduce and refer to the primed examples.

Why primed examples are bad (for linguistics)

Although there may be some justification for primed equation numbers in math, I don't think there are equivalently good justifications for their use in linguistics, and certainly not for linguistic examples (as opposed to e.g. semantic formulas that are being developed piecewise.) The only purpose to use a primed example I would think would be to show an alternative version of something that was essentially the same. But this is not really correct for linguistic examples, which, even if they differ minimally from each other, are not really the same ever.

This should work. But while "primed" equation numbers can be justified in math papers, I'm with Alan Munn in discouraging "primed example numbers".

It requires a couple of LaTeX runs to stabilize.

Not the answer you're looking for? Browse other questions tagged cross-referencing linguistics gb4e or ask your own question.