we get as output:

this is what we expect:

when we have the corresponding in Greek:

we get as output: 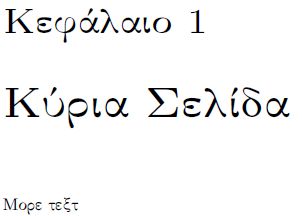 this is what we expect:

but this is not what we expect:

I know about the possibilities of switching between languages in tex but the problem here is that we used here the text "More text" where this could work, but in real life example this can also be a code line like printf("More text\n"); or printf("Κύρια Σελίδα\n"); so here we cannot use the switching methodology especially as we don't know what the content between the double quotes is and the output is automatically generated (doxygen).

Is there a solution for this "greek" problem?

The Greek output encoding LGR is a bit weird with respect to other output encodings. A requirement for a T<number> encoding is that it has Latin letters in the ASCII slots for letters.

The Cyrillic encodings T2A, T2B and T2C comply. Cyrillic is split into three different encodings because it has many more characters than can fit in 256 slots; however, each one of the three encodings covers Russian and some other languages, besides satisfying the requirement above.

This is not possible for polytonic Greek: even filling up the 256 slots leaves out a few rare characters.

The font layout for Greek fonts actually predates the very concept of LaTeX output encoding and Unicode as well.

A common problem at the times when the first Greek fonts were designed was how to input them. A method was devised by the font designer, Claudio Beccari, and some experts in the Greek language: to (almost) each Latin letter there corresponds a Greek one. So from a you get an alpha, from b a beta and so on.

It might be possible to define a “real” output encoding for modern (monotonic) Greek, because the number of needed glyphs can fit the 256 limit and also satisfy the requirement for Latin letters in the ASCII positions. However, this also requires working out completely new sets of fonts, properly laid out according to this new encoding.

The job would not require creation of fonts, because one can use virtual fonts and even “mechanize” the translation. Big project anyway.

On the other hand, if you use XeLaTeX or LuaLaTeX and a main font that supports Greek, you get the expected result. 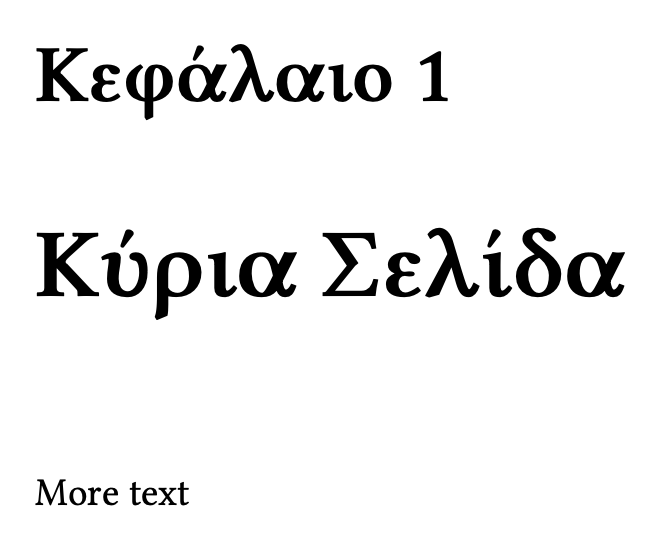 Not the answer you're looking for? Browse other questions tagged babel greek or ask your own question.