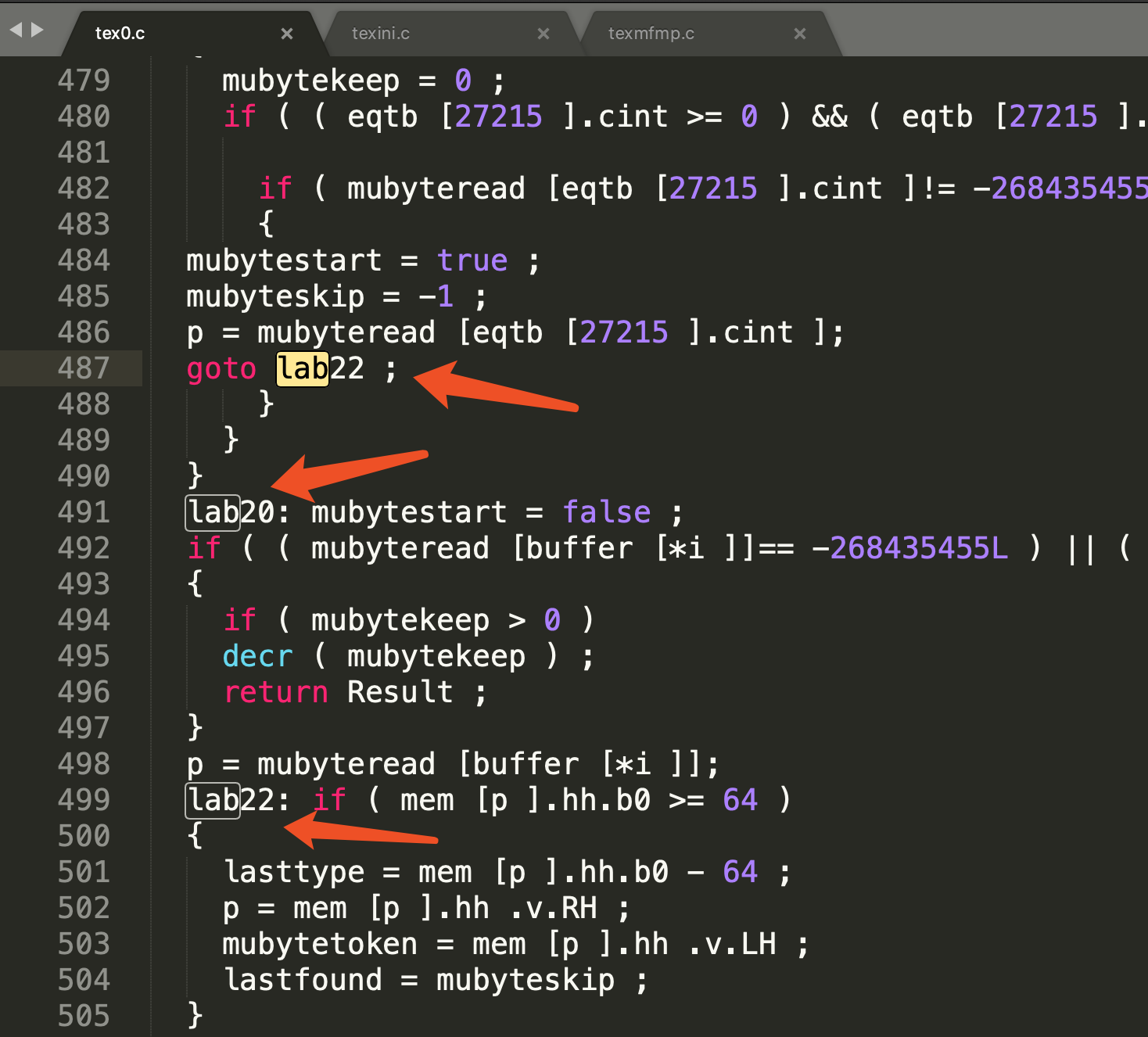 As shown above, I saw many labXXX in the source code of tex and pdftex. I'm really confused about them and there is no comments at all. Is there any doc that demonstrate the meaning of every labXXX? Thanks!

The file you are looking at is not really "source code" it is tex0.c which is C derived (by web2c) from the tex.web source code of TeX, which is written in web (documented pascal). Almost all comments are dropped in this conversion.

If you look in tex.web you will see the procedure

and various places this is referenced eg

In the generated C this sends up as

and a labeled reference to it

and then some jumps to that point from other parts of the loop:

To understand the source it is best to read the tex typeset document that can be generated from tex.web not the C that is extracted from it.

in texlive will bring up a hyperlinked typeset version of this source. This section appears as:

(Just to add a bit more detail to the other answer…)

Why does the TeX program have so many gotos?

Once upon a time, computers were programmed in machine language or (a slight improvement) in assembly language, where control flow is expressed using branches / jumps. Donald Knuth (who would go on to write TeX) did a lot of such programming (examples: 1957–1960 (video, texts), 1960). As higher-level programming languages evolved, they used a keyword like goto for such arbitrary jumps, and also introduced control-flow structures for common kinds of jumps like conditionals (if) and loops (while). Then in 1968, a major controversy was ignited when an article by Edsger Dijkstra (submitted as "A Case Against the Goto Statement") was published by the CACM editor Niklaus Wirth as a letter under the title “Go To Statement Considered Harmful”. Roughly the two camps of the debate were:

The former position was represented by “structured programming” (Dijkstra, Wirth, Hoare, etc). Knuth, though he wrote an encyclopedic article in 1974 summarizing both (and more) sides (PDF, HTML) always had his sympathies towards the latter.

For what it's worth, the current state of the debate (see summary on Wikipedia) seems to be that while the title of the letter seems to have become dogma and almost every programmer avoids or is afraid of using the word “goto”, in practice the control-flow structures available at the time (of ALGOL 60, ALGOL W, ALGOL 68 etc) were indeed deemed insufficient, and languages have indeed gained more control-flow structures that Dijkstra wouldn't have liked and which cover the examples raised in (say) Knuth's paper: early return from functions, and in loops continue and break (even labeled ones, in languages like Java and Rust).

Knuth wrote the first version of TeX (meant for use only at Stanford) in SAIL, but when there was enough interest in the program elsewhere and the danger of incompatible implementations, he set out to rewrite the program in a (then) widely available language in a maximally portable way, and the natural choice was Pascal. Now Pascal (invented by Wirth mentioned above) tries to strongly encourage structured programming:

So for example, where in modern languages you can write a function like this (sum of all the odd numbers less than n):

(just a made-up example with return and continue; of course this function can be written without them) in Pascal if you wanted an exact translation, you would have to use gotos and pick some ad-hoc numeric labels:

which I guess is sufficient inducement to avoid gotos and rewrite using booleans etc (straightforward in this case, but not always).

goto in TeX and WEB

These features of Pascal were fine for a teaching language, but Knuth (like others) must have found it annoying for writing large software programs with real-world constraints of performance etc., so he created a system called WEB that works around a lot of these limitations. The same program above in WEB could be written as:

This is the system followed by TeX, which uses goto but usually adhering to certain conventions, described in Section 15 of the program: 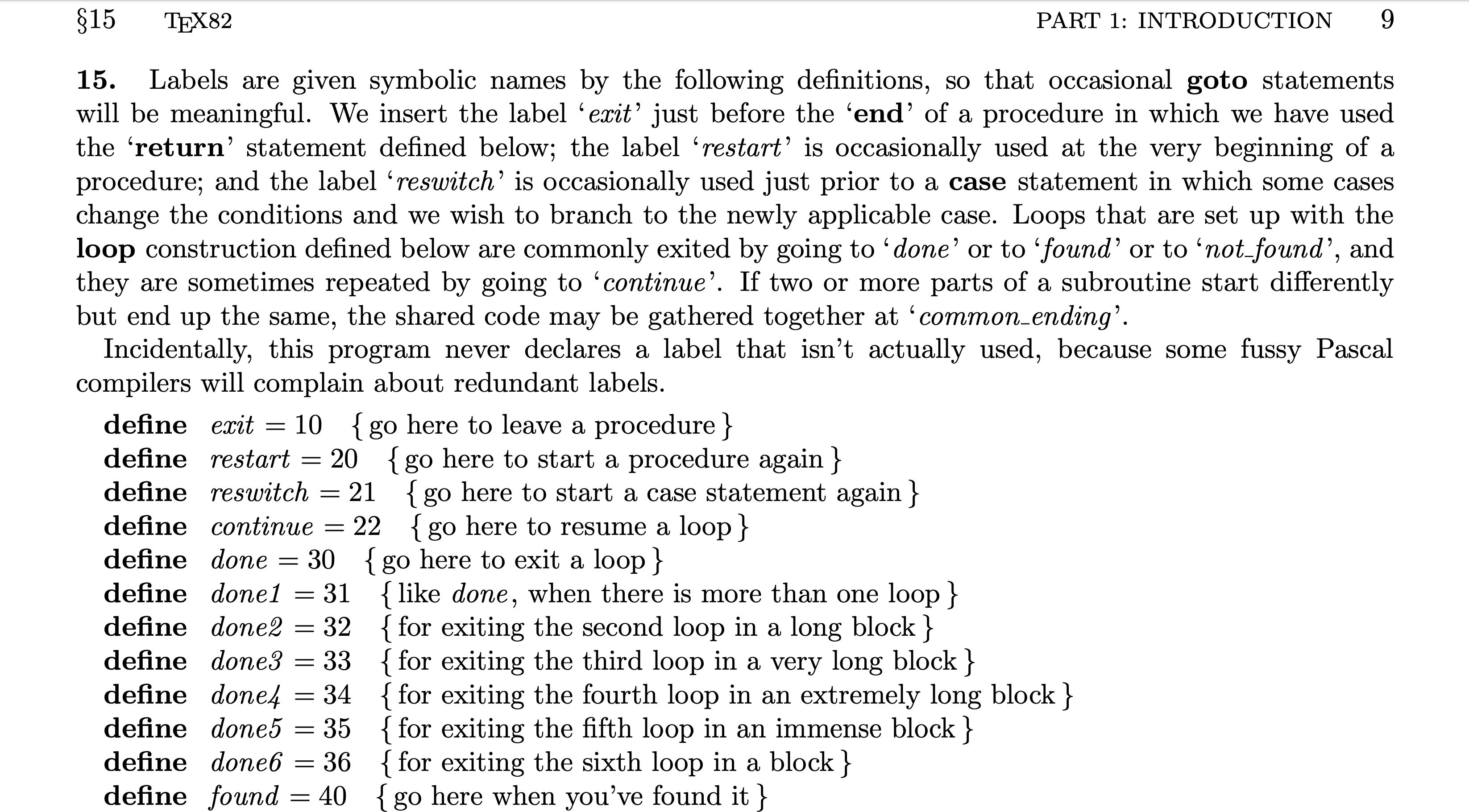 If you were using the Pascal implementation of TeX directly you would see numeric labels in the source code generated by tangle (part of WEB), but in practice most TeX users use a distribution (like TeX Live) that is based on converting this WEB/Pascal to C (using a system like web2c), in which the numeric labels are once again translated to start with lab.

This is used for example here (§380, I've reformatted the indentation):

so this structure of the function body being restart: ... if (...) goto done; ... goto restart; done: ... is basically an infinite loop, exited by goto done when some condition is hit.

This is used to re-do loops, for example things like

or variants thereof (putting continue at the end of the loop body, etc).

The specific example in the question

An added source of confusion is that what we're running (if using a modern distribution like TeX Live) is not TeX-as-written-by-Knuth directly, but one to which several changes/patches have been applied — and these changes may not always follow the same conventions for the labels, and sometimes aren't even valid Pascal/WEB (e.g. not declaring labels), as they've only been tested via the web2c pipeline (translated to C and run through a C compiler), not via a Pascal compiler. The one in the question shows things that come from EncTeX (see CTAN, Overleaf). In the source code, what looks like this:

gets turned into the (almost unreadable) C code you showed in the question:

My suggestion, if you're looking at the source code for either understanding or debugging (or rather, finding bugs), would be to start with either LuaTeX (written in C, though manually translated from WEB first: e.g. get_x_token is here) or one of the other non-WEB reimplementations — they may not have all the extra features from TeX Live, but they should be easier to work with.

Not the answer you're looking for? Browse other questions tagged tex-core sourcecode web or ask your own question.

12
Are there any non-WEB re-implementation of TeX Core in recent years?

17
Where I can find the source code of pdflatex.exe?
101
The differences between TeX engines
3
LaTeX alternative (amongst the “TeX style dialects”)?
14
What are the standard styles to format LaTeX source code?
5
How to include a programming language source code file in a plain TeX document?
2
What does the \afterassignment do in the following macro from the TikZ source code?
1
Lyx source code from tex extension to lyx
0
remove all insignificant whitespace from tex source
20
How many lines of code does the original TeX contain?