How to change default for spacing around binary relations?

In TeX and LaTeX, the math binary relations (like =, \parallel, <, \le ...) have a default (rubber-length) spacing to either side, which is too large for my liking. How can reduce it?

This answer doesn't encourage modifying the spaces, since TeX does a great job already. It merely discusses the concepts of spacing around math elements.

Spacing around math operators are discussed in the mathmode documentation (section 11 Space, p 28). Here's an example:

To manually adjust the amount of space around a symbol, you can change it to an ordinal symbol by wrapping it in braces - for example {=} - and then add the space your want around it: \,{=}\,. Here's another example: 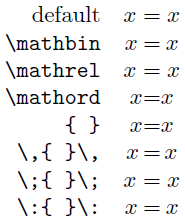 Negative spaces, although not shown is obtainable via \!. Of course, you can also use other spacing macros like \hspace.

Also see What is the difference between \mathbin vs. \mathrel? for a discussion between the difference in spacing around binary and relational operators.

Werner already explained that you have to change \thickmuskip if you want to change the default. However, I don't quite agree with Werner that TeX does a great job already; I also think that sometimes the spacing to either side is too large. The default \thickmuskip is

so it can stretch from 5mu up to as much as 10mu. (This stretching will only happen for inline math, not in displayed math.) While I like the 5mu, I think the added stretch is too much, and I think a little shrink is OK, too. So my preamble usually contains

Thus, I don't change the "standard" 5mu, but the space can only stretch to 8mu, and I allow it to shrink to 4mu. (If you wonder what a mu is: it's one 18th of an em from family 2, the symbols family.)

It's not much of a difference, but I like the second line better. Note that the default \medmuskip (used around binary operations) is

i.e., it can shrink to zero. Personally, I don't like that either, so I have

in my preamble – see the difference in the picture, too!

0
squeezing the equation fonts
107
What is the difference between \mathbin vs. \mathrel?
127
Using \colon or : in formulas?
39
How do I write $\sim$ approximately with the correct spacing?
9
Keeping the distance between mathematical symbols consistent?
13
Vain question about cdot kerning
6
Change spacing around binary operators
7
Cannot define new unit with siunitx
7
Text over the overbrace beyond "scope"
5
Hyphenation points within rigidly typeset formulas
See more linked questions