How to automatically linebreak an inline math formula?

Here is an example of a parbox that produces both an underfull and an overfull warning:

Apparently, parts of the formula can't be broken up across multiple lines. I would like to allow Latex to linebreak the text within the curly braces and to position it like the other text in the parbox. Is that possible?

I have searched for similar questions:

\allowbreak works for me as well. I can define specific points at which the equation may be broken up. But how can I avoid sprinkling allowbreak everywhere in my math typesetting? The following code works (well it still produces an underfull warning, but that's my text content and has nothing to do with the inline formula) but is horrible to read and edit:

The general recommendation I give is to avoid long textual set builder notation: readers will be very tired when looking at the text and they'll have a hard time in isolating the closing brace.

However, if you use the set builder notation, it is not a set, but the set:

If you insist in using the set builder notation, go back and forth in and out of math mode:

I used twocolumn in order to emulate your problem. Note \mid and not the simple | that has wrong spacing around it.

You can just put text in textmode.

Personally I think the set builder notation is appropriate, but stylistically, I would say this (or really anything this long) should be a displayed equation, simply because it's much easier to read that way than as an inline equation. 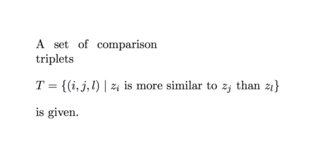 (Note that I also changed it to use \text for the text part of the equation, which requires including the amsmath package. Additionally, using \mid instead of | puts the correct spacing around the vertical bar.)

That doesn't solve the overful/underfull hbox issue by itself, but by using the multline environment, also provided by amsmath, you can add line breaks yourself: 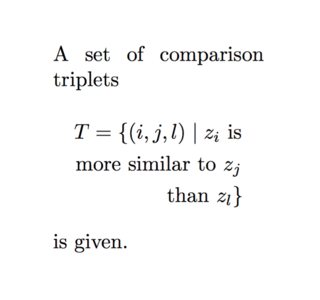 Admittedly, this still looks a little bit silly, but I'm hoping the 100pt column is just for the sake of the example and you actually have at least a little bit more space than that.

You can use \\ to insert line breaks in the multline environment, but they have to be outside of any command, which is why I've had to put several separate \text commands.

You can remove the * from multline* to give it an equation number. (I recommend always numbering displayed equations.) Also note that, for some reason, it's "multline" with one 'i', and not "multiline" as you might expect.

Not the answer you're looking for? Browse other questions tagged math-mode formatting line-breaking inline parbox or ask your own question.