Tikzpictures inside newcommand. Text below tikzpicture. Space between side by side tikzpictures. Overlapping drawings. (Not fully answered)

I'm learning tikz and I wanted to do something like this:

I have managed to get to:

I've created a newcommand to practice the syntaxis and to learn how to work with tikzpictures in newcommands. I'm also doing this because I'd like to learn how to create multiple pictures following a few math expressions or similar cases: Imagine you need to be able to plot a certain type of complex diagram multiple times in the same document, it would be such a waste of time and efficiency to rewrite the same code (changing a few variables) over and over. So, that's why newcommand is worth using here.

From now on, "Figure 1" will reference the left tikzpicture of My try; "Figure 2" will do it with the right one.

I have the following problems I can't solve:

The figures are from TeX's point of view large boxes and the text itself is composed of boxes. These boxes are placed side by side and so the figure on the right is placed after the text boxes that separate them. To bring the figures closer together, I simply included the text in the figures with the operation node. 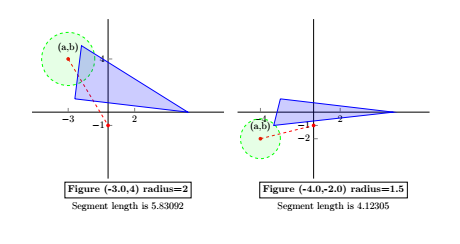 The code is commented with %<--

2
Automatically set axis limits making them surpass all the drawings

17
Numerical conditional within tikz keys?
21
TikZ: Drawing an arc from an intersection to an intersection
11
How to prevent rounded and duplicated tick labels in pgfplots with fixed precision?
3
Center the axes in the coordinate origin
2
Automatically set axis limits making them surpass all the drawings
2
How do I change the radius of circle in a node in tikz style?
2
Centering the x and y axes in the xy plane. And adding legends to function graphs