Formatting floats differently based on placement

I'm interested in changing how floats are formatted depending on whether they are placed at the top, bottom, or middle of a page, or on a float page. One package I am aware of that does something like this is tufte-latex, which places hanging captions in the margin below full-width figures if the figures are at the top or middle, but above if the figures are at the bottom. Looking at the code for tufte-latex, though, this is a pretty rudimentary check (as near as I can tell, the caption is placed on top exactly when the only placement specifier is "b"). And when the floats are put on a float page, the hanging captions don't look right.

Ideally, I'd like to be able to tell where a float has actually been placed and do something like

Presumably this would take a couple of LaTeX runs to iron out the positions.

You have to dig fairly deep into LaTeX internals for this but it is possible for the figure to be saved four times (set for t b p h float areas respectively) and then the output routine pick the box it needs.

In the version here I have not redefined the whole output routine, so while it does pick the correct box (I hope) various arts of the output routine that test measurements are not redefined. This means that when measuring they will see a box that contains all of the four choices side by side, so it will have height the maximum height. This is probably OK unless the settings are very different. In the example the settings just differ in wording slightly and in colour.

the \floatswitch command that this defines must be the only thing in the float, otherwise things will go wrong. 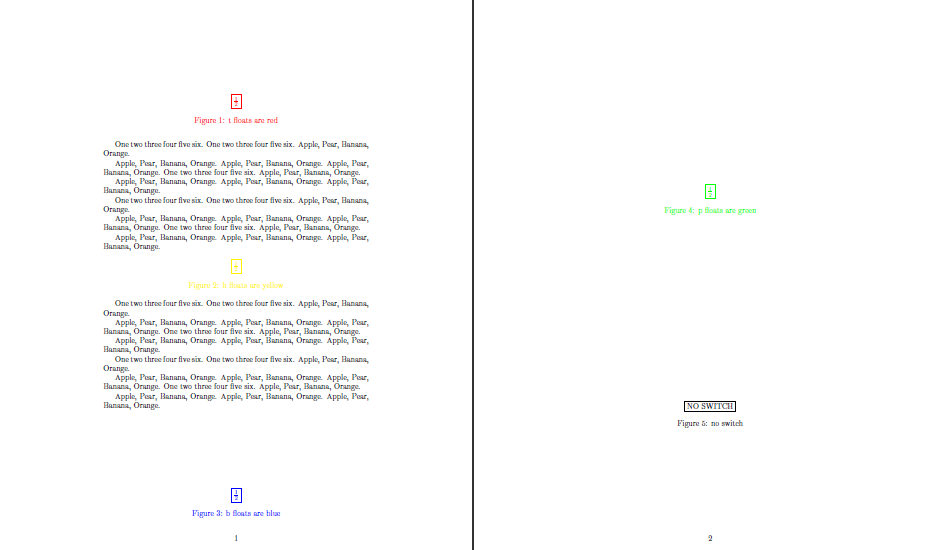 Not the answer you're looking for? Browse other questions tagged floats formatting positioning conditionals or ask your own question.

0
Change float content order depending on its position selected by LaTeX's float mechanism
15
Rotate image according to pagenumber
15
Is there a way to determine if there is a float on a page?
11
Auto-Range for size of figures?
6
Table heading too low if on the top of the page
3
Figure content does not appear on even pages after introducing changes to the output routine
2
Conditional \captionsetup depending on floating position
2
Is there a way to make a float that only gets finalized once placement has been determined?
1
Figure and floats wider than \textwidth placed differently in odd and even page
1
Query left margin of page
See more linked questions

4
Adding a frame and background color to floats in ConTeXt
4
Appendix Figure Placement
7
Floats in the middle of paragraphs
5
Different Caption-Setup for top and bottom figures?
3
New float environment in tufte-book with alternate caption placement for full width figures
0
Arranging floats correctly
3
Knowing where floats are positioned to add conditional attributes
1
How to avoid two floats on the same page?