How to escape a quotation mark character/glyph?

I have the same problem as in this question, but the answers just circle around how to best use quotation marks. This is fine as long as you actually want a quotation mark. However, I explicitly don't want it.

And there is one legitimate reason: I want to display code. Verbatim. Without any change. So I put that in \texttt, or in a special command I have defined that also just does this.

Obviously this is bad. Obviously I don't want to use typographically correct quotation marks.

¹ Actually, it seems to force a line break and showed this:

Argument of \language@active@arg" has an extra }.

I basically just want Markdown-like behaviour of the `.

In other words: How do I really escape " in LaTeX?

You can disable shorthands locally with \languageshorthands{none}:

Use an indirect method that changes the meaning of the active ", if it is active; if not, the code does nothing harmful. 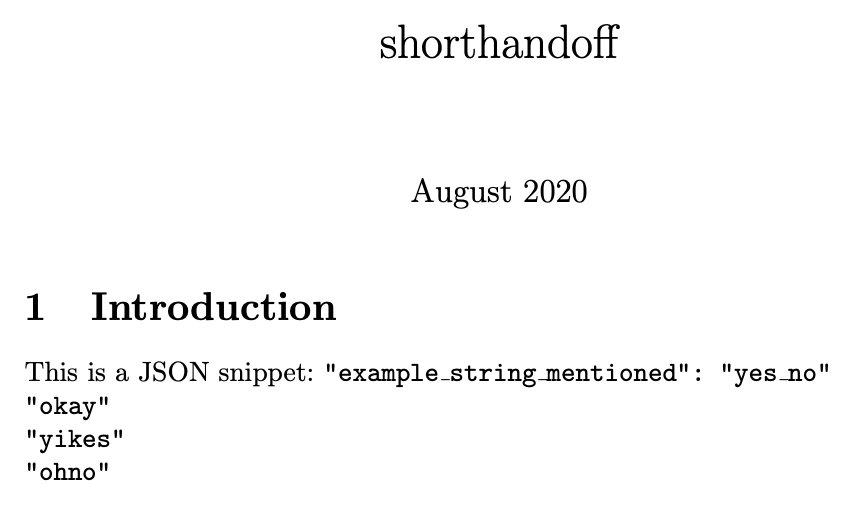 Even though the question focuses on the " character, it seems to really be about how to display inline verbatim (JSON) code.

The standard way to include inline verbatim text is with \verb, like

With verbatim characters are shown as themselves. That includes spaces, which means that there are no linebreaks. (Also these verbatim spaces are not stretchy as normal spaces are.)

Another way to include code is to use packages that are meant for that, like listings. That package includes commands for showing code listings given in the TeX file or taken from an external file, and also for short inline code, like this:

(Of course the basicstyle setting here is just an example.)

Both here and for \verb the delimiting | character can be some other character. Some popular choices are /, + and !, depending on what's in the text.

One big feature of a package like listings is to do code highlighting. It doesn't know about JSON syntax out of the box though. If you are interested in customizing that (even though it wasn't mentioned in the question), you can see for example this and this question.

More to the point here, there is an option to allow linebreaks. Just add

to the \lstset settings.

There is nothing extra you need to do for the straight " character if you use normal typewriter font with the above. But you will find that the straight ' character is still shown as a curly quote! There is a package to avoid that in verbatim text. Add:

191
Escape character in LaTeX
153
What is the best way to use quotation mark glyphs?
50
How to improve listings display of JSON files?
11
Quotation with double quote and O results in Ö