While editing beamer in Emacs with AUCTeX and RefTeX, how can I make the C-c = command list the frames instead the sections? Is it possible to customize the outline command?

The key binding C-c = is provided by RefTeX and not by AUCTeX. C-h k C-c = returns:

C-c = runs the command reftex-toc (found in reftex-mode-map), which is an autoloaded interactive compiled Lisp function in ‘reftex-toc.el’.

Show the table of contents for the current document. When called with a raw C-u prefix, rescan the document first.

In order to tell RefTeX about new sectioning commands you have to customize the variable reftex-section-levels:

reftex-section-levels is a variable defined in ‘reftex-vars.el’. Its value is shown below.

You can customize this variable.

Documentation: Commands and levels used for defining sections in the document. This is an alist with each element like (COMMAND-NAME . LEVEL). The car of each cons cell is the name of the section macro (without the backslash). The cdr is a number indicating its level. A negative level means the same level as the positive value, but the section will never get a number. The cdr may also be a function which will be called to after the section-re matched to determine the level. This list is also used for promotion and demotion of sectioning commands. If you are using a document class which has several sets of sectioning commands, promotion only works correctly if this list is sorted first by set, then within each set by level. The promotion commands always select the nearest entry with the correct new level. 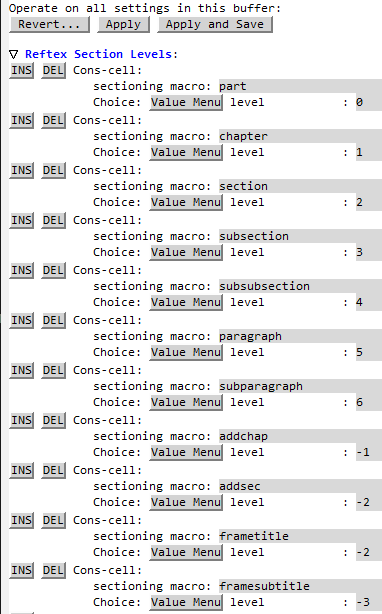 And hit Apply and Save. Now open your .tex file and try it again.

Not the answer you're looking for? Browse other questions tagged beamer auctex reftex or ask your own question.

4
AUCTeX: How to enable auto expansion of sub and superscript in custom math environment
2
Hide/show individual chapters/sections/… in the RefTeX TOC buffer
7
Cleveref: AUCTeX and RefTeX set-up
1
How may one set the equation counter in AUCTeX?
1
AUCTeX+RefTeX compile bibliography without explicitly providing bib file path
4
Emacs, AUCTeX, RefTeX and biblatex's multicite commands
2
AUCTeX/RefTeX with import package in emacs, known problem from 2013 but is there a fix now?