Change font for a specific command

I would like to change the font associated specifically with \mathcal to cambria rather than the default font without changing the rest of the document.

How may I do that? I don't mind setting up a newcommand which calls both the font and mathcal in order to do so but I don't want the text around it to change font from whatever mathmatical font is set by default.

Edit: As requested I simply want to produce what is discussed in this thread: how to represent these symbols from Word in LaTeX? Without changing the font of the entire document, i.e. the cambria font should only be in effect for the \mathcal command.

My thought is there must be a way which incorporates \newcommand in order to set a new command which is able to act like \mathcal but also changes the font to cambria.

Edit 2: For those of you who may be using pdflatex you will need to switch to XeLaTeX or LuaLaTeX and add the following lines in your preamble so that the mathfonts are pretty much the same as in pdflatex with cambria \mathcal:

I don't think that Cambria is available for pdflatex. Here's a simple setup for XeLaTeX or LuaLaTeX. 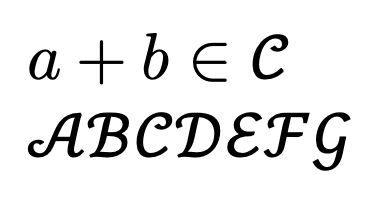 Not the answer you're looking for? Browse other questions tagged fonts macros mathcal or ask your own question.

2
how to represent these symbols from Word in LaTeX?

501
How do I use a particular font for a small section of text in my document?
2
Using Greek letters with the Nath package
3
XeLaTeX, Latin Modern, \mathbb and \mathcal
1
How to change the MATH and Text fonts for just a part of the document?
0
Change math font to sans-serif default in Beamer metropolis theme
3
How to add a font style for a specific letter only?
1
Using stix2 with amsart and not running out of math alphabets