I want to have the captions of my subfigures showing not only the current subfigure counter, but also the current figure number. So, for example, subfigure 1a would have caption 1.a - Caption. I managed to do that by changing the \thesubfigure command, but then I ran into two problems (MWE follows):

Regarding the second issue, I found this question and I imagine I could change something like the \p@subfigure to show only \thesubfigure, but that would give me a reference \thefigure.\thesubfigure, while I would like to reference the subfigures as 1a instead of 1.a.

About the first issue, the closest I could find to a solution was this question, but I don't want to add every number manually, as I have many figures like this in my document. I know this has to do with what is explained here, but if I put the figure \caption before the subfigures, the caption position moves to the top.

As an extra, any tips on how to change the labelsep of subfigures caption to - would be appreciated.

INFO: The way I'm adding the subfigure captions to each tikzpicture was inspired by this question.

This leaves the numbering scheme, references etc. intact and only changes the appearance of the sub-captions in the figures.

The complete document, including the two changes above:

With use of the subcaption (which you already loaded):

Note: package hyperref (with rare exception as is cleveref) had to be load last in preamble. 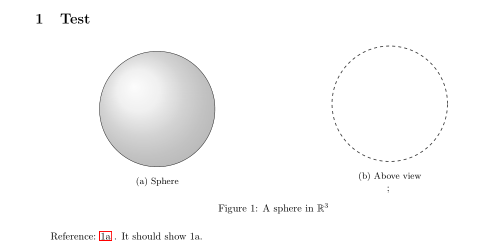 Not the answer you're looking for? Browse other questions tagged cross-referencing captions subfloats subcaption or ask your own question.

118
Why does an environment's label have to appear after the caption?
7
Cross reference formatting options
3
subfigure caption format differs for \captionof
2
get caption/subcaption every plot using groupplot pgf tikz

2
beamerposter subfigure
3
How shoud I manage captions and sub captions with float and non float items?
25
Referencing to subfigures in main caption
7
Table caption not appearing in PNAS document class
3
Overlay subfigure caption with TikZ
13
Use \captionof in conjunction with \subfigure?
1
subfigure subcaption in centre
0
LyX to LaTeX conversion issue with [Figure] and [Subfigure]