I'm using KOMA-script (e.g. scrartcl) with polyglossia and the French language. Parts are therefore numbered like "Première partie", "Deuxième partie"..., instead of "Part I", "Part II"... 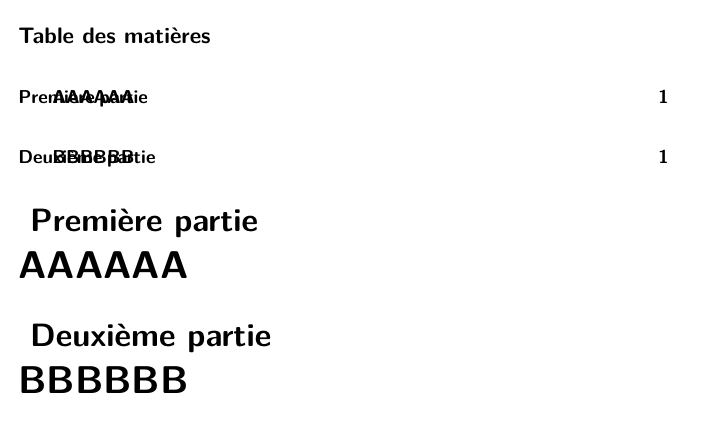 How can I fix this? I tried to modify \thepart but it does not seem to do anything; I even tried to put garbage (undefined commands) in it and the document still compiled fine so it's apparently not even used... I also know that there is the toc=flat option, but this looks really bad in my opinion.

I am aware of this Q&A, but it deals with the memoir class and is not applicable here. As far as I can tell this is pretty much a bug in KOMA-Script, but since I am not able to read German I have no idea where to go on their website to report this so I'd settle for a quick and dirty fix.

KOMA-script supports auto-sizing the width needed for the numbers in the TOC. You'll need at least three LaTeX runs to get the correct results (one to build the .toc file, one to measure the widest entry, one to get the results).

The following makes the necessary changes to part to achieve this.

Not the answer you're looking for? Browse other questions tagged table-of-contents koma-script polyglossia or ask your own question.

5
How to add a description (“precis”) to a toc entry with KOMA-Script class?
3
Table of contents broken with Koma Script and lstdoc
0
Problems with fancy style and KOMA-Script
1
How to modify \part names?
5
Replacement minitoc package style by KOMA-script possibilities
2
Parts broken in TOC with Polyglossia / French
3
How to change part name in TOC only (with babel)? Or How to patch a bug in babel french with amsart