Note: It turns out that this is an issue with circuitikz 1.0 and is apparently not a problem in the current version. A workaround would still be helpful, but it means the question isn't very urgent - I'll find a way to work around it for now and then update later.

I'm trying to draw some diagrams that mix circuit symbols with other notation. To do this I'm attempting to use circuitikz. However, it seems that when I attempt to add a circuit symbol to a path, it causes the path to overlap the nodes it's drawn between. Here's a minimal example - the only thing different between these paths is the use of [R] to draw a resistor. 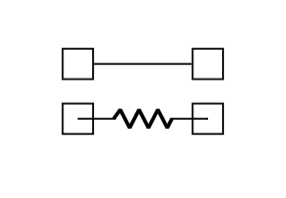 Is there a way I can prevent this from happening, so that the second diagram will look like the first, except with a resistor drawn in the middle of the line?

I know that I could fill the nodes and draw them after the line, and will do if I have to. However, in my actual document this is drawn with a series of macros and I'd have to change a lot to accomplish that. So I'm looking for an easier solution, if one exists.

Because it's drawn with macros, the solution needs to be automatic - it will be a lot of work for me if I manually need to specify things like A.east and B.west. In addition, the nodes aren't necessarily all directly above/below or left/right of each other in the real diagram.

I suspect that the only practical solution is to upgrade circuitikz (which is really easy, even in a local form).

The problem was that from some archeological version (don't know when, really, it was before git times) the code to generate paths in circuitikz was changed so that if the path started at a node the starting point was forced to the coordinate node.center. (The code was made better by other developers, as you can see following the links, but basically retaining that behavior).

My personal opinion is that this was ill-advised (it fixed a couple of circuits that where wrong, using nodes instead of coordinates; but at that times I was not involved in the development and surely did not have the skills to be there, so...). That forced a series of workarounds in the code that became impossible to maintain in my opinion and led to problems at line junctions.

So I took the plunge and removed hacks and that change before 1.2.0. Your example is practically the same I used to defend the change, look here: https://github.com/circuitikz/circuitikz/issues/76#issuecomment-652980687:

To explain point 1 here: this code 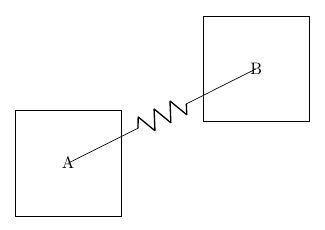 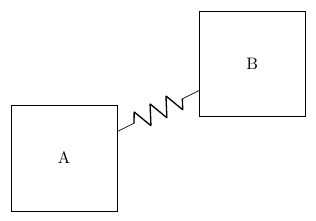 now --- you can easily have the old behavior (if you really wanted it) with using A.center and B.center explicitly, but it's really complex to obtain the new one --- which in the rest of tikz is considered the correct one.

Not the answer you're looking for? Browse other questions tagged tikz-pgf circuitikz or ask your own question.

4
I need to use a different version of circuitikz. How can I do that?

19
How to define the default vertical distance between nodes?
1
connections with circuitikz
4
How to rotate Circuitikz circuit as a whole?
5
New component in circuitikz
9
Line up nested tikz enviroments or how to get rid of them
0
Black nodes in Circuitikz when adding voltage arrows
3
Help with drawing the following circuit diagram
1
Tikz line doesn't start exactly from node coordinates
1
Fuse symbol with TikZ in circuitikz environment