Environments create commands? What am I missing?

I was surprised to discover that when I create an environment in LaTex, a command of the same name is created. For example:

produces the output "Foo: bar" as you can see in this Overleaf example. In addition to Overleaf, it also works in Texpad, so it seems widespread.

My first question is: where can I find this documented? It doesn't pop out in any of the places I usually look.

It seems fantastically useful: I'd love to use \align*{...} rather than \begin{align*}/\end{align*}

Second question: am I missing something? Is there some reason that this is problematic?

Edit: Thanks for the thoughtful detailed answers! To boil it down, the \newenvironment command creates two commands: in this case \foo and \endfoo which, generally speaking, contain your specified code. When you do \begin{foo} and \end{foo}, it not only surrounds your code with those commands, it also surrounds it with \begingroup and \endgroup, similar to wrapping the whole thing in braces. I have edited my overleaf example above for and MWE of how this fails with a user-defined command. I also found this answer helpful.

It's not fantastically useful, sorry. Try

and you'll get the following output. You might be surprised, but you shouldn't be.

and we realize that \csname #1\endcsname, which in the case of \begin{foo} will become \foo, comes rather late in the processing. If we follow the “false” branch, the one that's used when the environment is indeed defined, we eventually get

If you just use \foo, you miss all the preceding code. It's not important that you understand the code, but it's essential that you realize that it's there!

There is similar bookkeeping when \end{foo} is processed, in particular \endgroup is emitted to balance the previous \begingroup that you see in the code above.

Believe it or not, it is this \endgroup that makes a big difference in the center example I showed.

By the way, amsmath environments such as align behave even differently and calling \align...\endalign will break so many things!

There is a case when \foo and \endfoo can be used quite safely, for instance for defining a new environment based on foo. But leave this to when you'll be an expert of LaTeX coding. Meanwhile, use \begin{foo}...\end{foo} and be happy.

No output whatsoever. Not for the faint of heart.

There are important differences between macros and environments:

The MWE below demonstrates all three of these differences.

The tokcycle package allows one to cycle through the tokens of an argument or input stream and process them according to specified directives. The package provides both macro and pseudo-environment forms. By "pseudo-environment", I mean an environment requiring the use of \macro...\endmacro syntax, rather than the more familiar \begin{envname}...\end{envname} syntax.

In the MWE, I directly typeset (rather than store in a token register) the tokcycle-processed input. The processing is as follows: any token will be echoed to the output, except cat-7 ^ tokens, which will be output as an \fboxed string. When the process is complete, the value defined by \aftertokcycle is typeset, here being pre-set to an exclamation point !

I employ this processing using both macro and environment approaches to the following input: \chcat This is a ^ test, where \chcat is a macro that changes the catcode of ^ to a value of 12.

Item 1 is demonstrated by showing that, following the macro exit, the catcode of ^ remains at 12, whereas following the environment invocation, it returns (because of grouping) to its prior value of 7.

Item 2 is demonstrated by noting that only the ^ in the macro gets \fboxed. This is because, as part of a macro argument, the ^ is tokenized as catcode 7, regardless of what changes transpire in the course of executing the argument. In the environment alternative, the ^ is not boxed, because it has been tokenized only after the catcode of ^ has been changed to 12 in the course of executing the input stream. 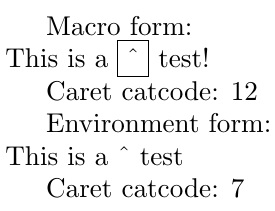 For the geek: The macro and environment forms of tokcyle used in this MWE both rely on the same underlying "raw" pseudoenvironment. The code to these interface forms may help to clarify why the macro acts like a macro and the pseudo-environment acts like an environment:

27
Duplicating Environments
3
Difference between using `\abstract` and the `abstract` environment?

11
Errors when trying to define a custom align environment
2
Reading and (custom) formatting a CSV (not \csvautotabular)
1
Strange behavior: running the same command twice in the same environment acts different than one each in two environments
3
LaTeX Utility/Template for Generic Reusable Code
2
csname in newenviroment
2
Macro to write new environments named by arguments
0
Defining a new environment that utilizes the optional package inside