How can I get the bounding box of a specific group of objects in TikZ?

The problem is that the elephant and toaster are actually complex procedures that draw and fill many TikZ paths, create many nodes, etc., and these procedures are (generally speaking) unable to report back their topmost, leftmost, etc. coordinates. Hence what is needed is a facility:

to draw a red box around the elephant and toaster (with a 2mm inner margin) where scoped bounding box works exactly like current bounding box except that it only considers the objects drawn by code between the designated start and end of scope.

I don't require this specific syntax, setup, or command order. Anything that yields the coordinates for the "partial" bounding box in a format that can be used in TikZ point arithmetic will suffice, with the lone caveat being that whatever code is injected must not alter the coordinate frames or style options of commands in the subroutines to render the elephant and toaster. Also, it would be greatly preferred if the none of the code in the elephant and toaster subroutines needed to be altered, although I understand this may be necessary.

There is a syntax dedicated to this, it is the local bounding box. See section 106.4 Special Nodes of the TikZ manual. 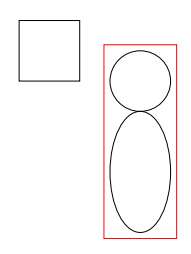 I didn't understand everything, but it seems to me that a solution is to encapsulate your elephant and toaster procedures in two nodes and then to use the fit library. It is not advisable to encapsulate tikz figures in nodes but it is sometimes practical. 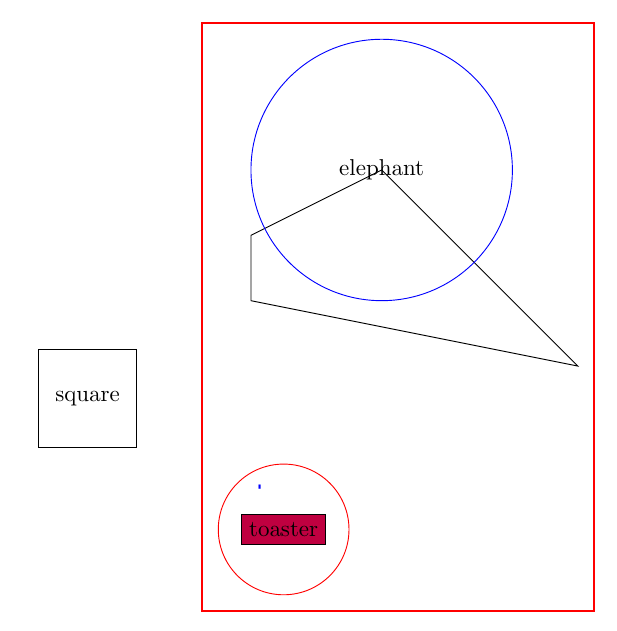 Not the answer you're looking for? Browse other questions tagged tikz-pgf bounding-box or ask your own question.