How to change coordinate system inside a tikz path

So recently I started getting my feet wet with drawing 3D drawings. I'm trying to draw a 3d drawing with the tikz 3d library. But I'm facing some problems.

mainly commands like circle, arc, and rectangle don't seem to work in the third dimension, which makes sense, since they work in the plane. To work around this, the pgf manual specifies that you can simply select a plane, and where on the normal vector you want to be, and then draw on that plane. In the pgfmanual (3.1.6a section 40.3) they do this in the scope environment. The problem with this is that you cannot then draw outside the plane.

So I was wondering if there was some way to select a plane for commands like circle, arc, and rectangle without entering a scope. The idea is that I would like to integrate these commands into a larger draw or fill command, for example by changing the coordinate system in the middle of a path: \draw (0,0,0) -- ++(1,0,0) arc [yzplane at x=1, start angle=0, end angle = 180, radius=1] -- cycle;

My concrete problem is shown below. I have placed a circle on the yz plane, and I want that to be the circle of a cone. I can then draw lines to the edges of this circle, but I cannot figure out how to shade it in.

Below you see my attempt at getting this circle shaded, but as you can see, it's placing the arc in the xy plane instead of the yz plane. 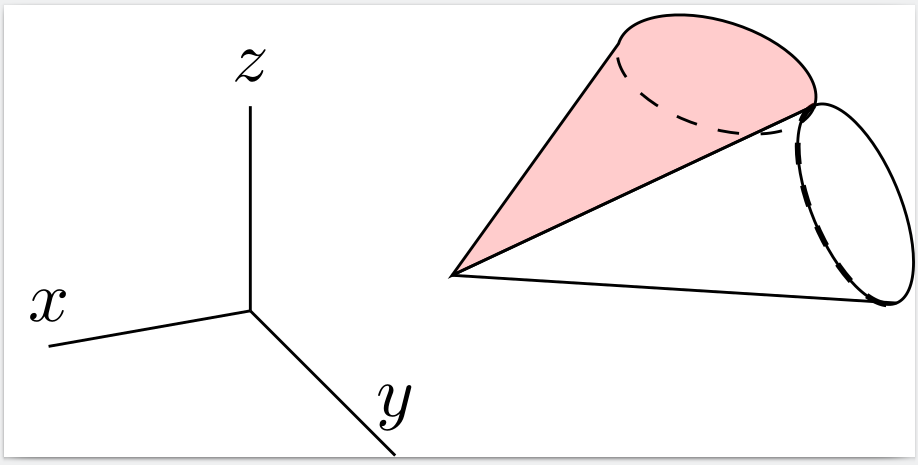 What you want to achieve can be done by using symbolic coordinates. You can access them from within the scope that brings you in the plane.

Notice that you can change the coordinate systems in a path.

There are situations in which you do not want to have the projections that come with the 3d library's styles, in which case you can set up your own [yzplane] that can gets injected in a path.

This means that when using tikz-3dplot you can insert [tdplot_main_coords] or [tdplot_screen_coords], say, within a path to switch to a new coordinate system in the middle of a path.

Not the answer you're looking for? Browse other questions tagged tikz-pgf tikz-3d or ask your own question.

58
How is arc defined in TikZ?
17
TikZ: Drawing an arc from an intersection to an intersection
6
Draw arc with start radius different from end radius
9
Line up nested tikz enviroments or how to get rid of them
0
how can I draw the radius of an arc using r * (cos (angle) and sin (angle))
1
Drawing Elliptical Arc in tikz or tkz-euclide
8
Drawing an arc between 2 nodes with a specific radius
2
tikz tangent arc between two circles
1
How do I change the radius of circle in a node in tikz style?
3
Document header with tikz