Should running-text numbers be typeset with math mode?

Should I typeset numbers in a running text with math mode?

I tried it out with the default font, and there does seem to be tiny differences in kerning. That could just be my imagination, though.

In the log file we can see the result of the \showbox commands; I added AV just to show how kerning is displayed.

The two boxes are exactly the same except for the \mathon and \mathoff items that may add a kern if \mathsurround is nonzero.

You can see that the digits are taken from the same font. This is important in case other settings are chosen, for example Euler digits.

Write in math numbers that are intended in their mathematical sense. Page numbers or years, for instance, are "words".

This is an extension and illustration of points made in the comments and is intended to complement egreg's answer.

Although people sometimes talk as if there are just two kinds of figures - old-style/hanging/text, on the one hand, and lining/maths, on the other - this is only part of the story.

Figures can take various forms and fonts vary in the kinds and variety they provide. For example, some fonts provide specialised characters for use in subscripts and superscripts. Others provide figures designed specifically to match small-caps.

Whether a style is lining or old-style tells you how the figures are positioned relative to the baseline: a lining figure sits on the baseline, whereas an old-style one may hang partly below it.

Whether a style is proportional or tabular tells you the relative width of figures: tabular figures all have the same width whether they are fat (like 0 and 8) or thin (like 1 and 7), whereas proportional figures have different widths depending on the fatness or thinness of their shapes.

By way of illustration: 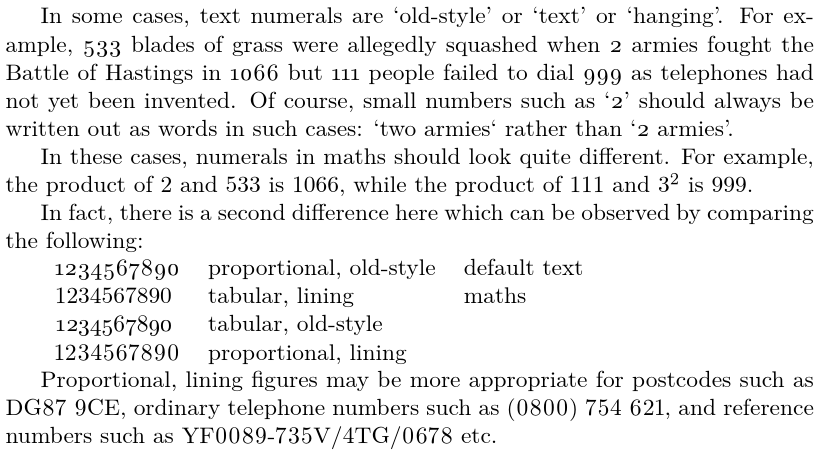 I have yet to find a use for tabular old-style figures, but I use the other three kinds regularly.

1
Is there any difference between math mode and text mode for numbers?
15
Old-style figures: Use in references/brackets (e.g. to equations, bibliography) or not?