I am encountering something whilst using inline math mode, for which I would like to find a means of avoiding. I notice that if the inline math mode is too close to the right-most edge of the line upon which it would appear compiled, it spreads onto the next line. Here is a selection of code for a MWE to show what I mean:

On the first and second lines, $\lin\{\psi(\cdot)x;x\in H,\psi\in D\}$ and $\|\cdot\|_{L_2(\mu;H)}$ are spread onto the subsequent line. Whilst not shown in this MWE, I notice too that sometimes this can have the impact of inline math expressions running over margin boundaries.

Is there a way to force TeX to put these math-mode expressions onto the next line, so as to avoid them spreading across two lines, whilst also increasing the white spacing between words in the previous line, so as to fill up the space in the line which would otherwise been filled by the shifted portion of the math-mode expression (and avoid the awkward white space you would get if you were to use \newline)? Is there a solution I can apply document-wide rather than just by paragraph?

The line break in the middle of your construction \|\cdot\| comes because TeX does not know that the first \| is an "opening"-type symbol, and the second one a "closing"-type. You should tell TeX by using \lVert...\rVert, or better by defining a macro \norm{...} which takes care of that. This won't solve all problems, since inline math always complicate line breaking. You could try inserting \linebreaks manually, or \allowbreak, but in the end the human eye has the last word, and in many occasions a rewording is the best thing to do. Also I would avoid long inline math expressions. 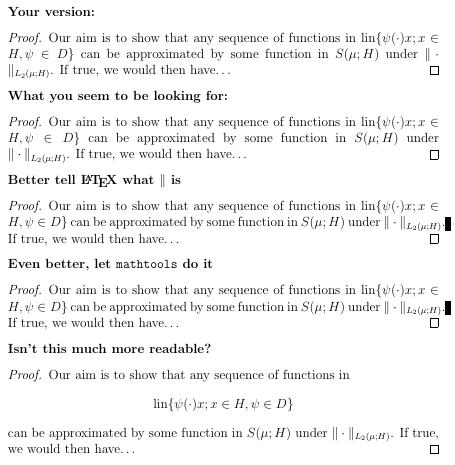 Not the answer you're looking for? Browse other questions tagged math-mode amsmath line-breaking margins line-spacing or ask your own question.

9
Forcing math mode to be on the same line
30
How to force normal line spacing when inline math in text
5
What are the generally accepted guidelines for adjusting \linespread to avoid extra spreading from inline math?
3
Retain line breaking behaviour inside macro
5
Use different math font in inline-style and display-style formulas
6
Can I mark when there is a line break in inline math?
2
Repeating certain signs after linebreak in inline math expressions
1
LyX math. git and maths mode
3
Move whole inline math to new line if it is too long
0
How to automatically linebreak a (small) inline math formula?