tl;dr: Is there a way to forcibly override the page number settings of any existing style sheet?

I frequently find myself in the following situation: I am writing a report or paper of some kind using an external style sheet that cannot be modified (think, thesis, journal submission, etc.). There are page limits, but the external style removes all page numbers. So, when writing, I have no idea how many pages I have used or what page I am on.

So, I've been trying to find a way to add page numbers back to the document, overriding any previous settings set by the external style sheet. Before submitting, I will remove this so the original style is preserved. Of course, the solution should not depend on the style. I am looking for a global solution that would apply to any (or, say almost any if there are pathological edge cases) document and style.

Given the tags I assume you use Overleaf as an editor. The built-in pdf viewer in Overleaf does not show page numbers as part of the viewer interface, however usually the built-in browser viewer does show which page you are viewing.

You can select the built-in viewer to be used with the Overleaf menu (click on the top left button labeled Menu), scroll down, and select Native at the PDF Viewer option: 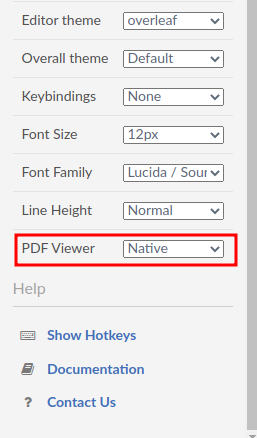 Now, when you compile the document, it will show the page numbers. For example in Chrome:

Note that I could not make it work with Firefox, which insisted on opening the preview in a new tab instead of inside the Overleaf environment like in Chrome. I don't know about the behaviors in other browsers or other operating systems (I tried with Ubuntu).

However, this solution when it does work is probably much easier then trying to change the behavior of a class or style, and much more generally applicable.

Not the answer you're looking for? Browse other questions tagged page-numbering overleaf thesis journal-publishing journal or ask your own question.