EDITED:11-23-2010 In case anyone stumbles upon this question and has a similar problem. The Ubuntu/Debian repositories have an old version of revtex that exhibit this bug. Until the repos are updated, there is a .deb file available in the bug report that installs the new version of revtex

I'm Trying to get multiple affiliations for the author list when using revtex-4.1

The default behavior is to group the authors together according to affiliation as so:

However, this requires you to group authors together in an unnatural way, and usually in a way that conflicts with authorship politics. Even if you switch to superscriptaddress mode, the requirement on grouping still remains.

For example, If I want to have two authors share an affiliation, but have one of the authors have a second affiliation, the whole thing ends up ignoring the first affiliation of the second author: e.g.

Gives you the following

If you try to remove bug's affiliation then they both end up inheriting both affiliations. Like so:

What I want it to do is to give Daffy two superscripts, and Bugs bunny only one. The picture gets even harrier if (for example) I try to put J Ripper in between bugs and daffy. Then the numbers get even more screwed up. Using alt affiliations doesn't solve the problem because the alt affilliation goes into a footnote.

There used to be a "feature" in revtex-4, that if you used \address instead of \affiliation , then the whole thing behaves as expected. However, it seems that the latest version of revtex4-1, has patched this "bug", and now even old documents that worked fine, have broken affiliations. e.g.: 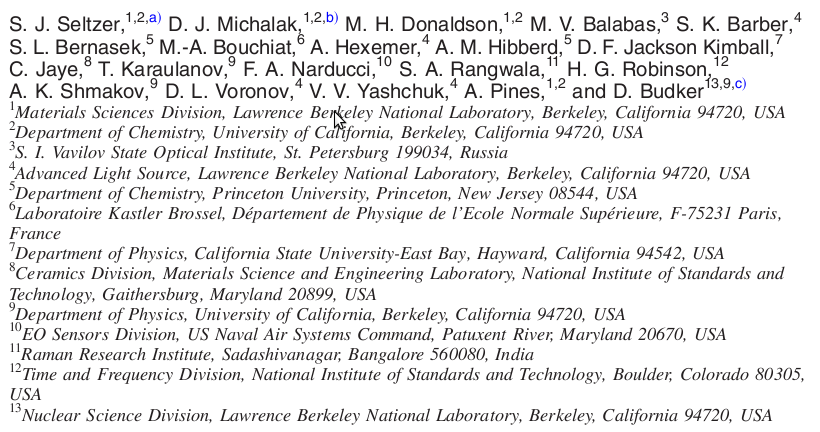 Ignore the style differences (the first one was typeset by arxiv with a prl instead of an api style).The latex behind the two is identical. Full Disclosure: I'm one of the twenty co-authors

Works for me. I am using

which fixes a number of bugs in the affiliation code.

This can be accomplished by selecting the class option superscriptaddress in documentclass.

Not the answer you're looking for? Browse other questions tagged titles revtex affiliation or ask your own question.