In a tree, how do you have a node that is a also a tree?

In general, what is a good way to have a tree where nodes are also a tree?

Here is a particular image that I'd like to produce in latex: 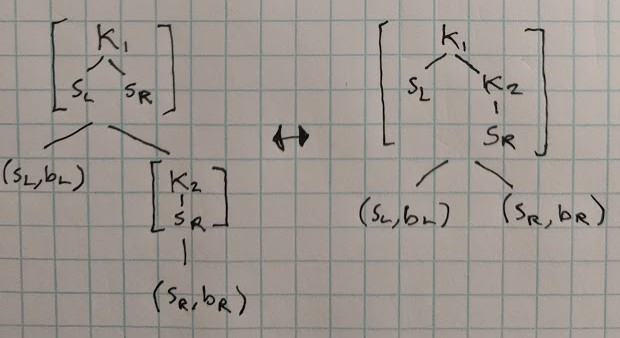 What is notable is that the left tree has two nodes that are themselves trees, and the right tree has one. These nodes also have a bracket around them. If you replace these nodes with, say, a letter or math object, it's straightforward to use either the forest package or tikz. In the forest's manual, it looks like there is support for having a node be a table, among other things, but I had no success having a node be a forest object.

Here is an example document of the left tree where tree nodes are replaced with A and B. First with forest, then tikzpicture.

Approach taken: embedding tikz. Notice that the scale paramater had to be modified in the embedded nodes. Also, I was unsuccessful getting brackets around the tree-nodes and instead opted for a box. 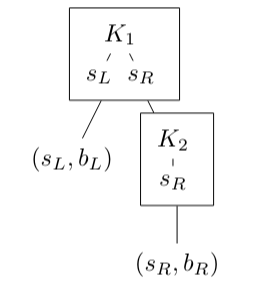 Here's a way using \savebox. Thanks to Ulrike Fischer for discussion in chat about math baselines. I've put each of the tree subnodes as a separate save box. These can be reassigned for subsequent trees. 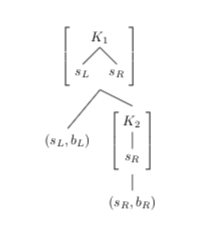 With the code above, the nodes are aligned at their centres, which leads to uneven branches. If you would like them aligned uniformly at the top, you can dispense with the saved tree style altogether, and just add anchor=north to the math tree style: 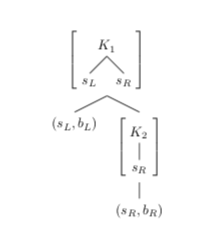 Not the answer you're looking for? Browse other questions tagged tikz-pgf tikz-trees forest or ask your own question.

21
How to define the default vertical distance between nodes?
6
How to connect two parents to the same child, with parents not in the same tree?
16
Numerical conditional within tikz keys?
9
TikZ nodepart children
12
Drawing rectilinear curves in Tikz, aka an Etch-a-Sketch drawing
9
Line up nested tikz enviroments or how to get rid of them
3
How can I make directory trees with icons that handle page-breaks?
3
Arrow between BTrees
1
How do I change the radius of circle in a node in tikz style?
3
Document header with tikz