How do I align a third node below the exact middle of a horizontal line between two nodes situated above?

I have found these two answers which are similar to mine. However, my problem requires me to adjust the vertical distance between a horizontal line and the north point of a node, due to the different number of rows used in my diagram. In other words, I need to exactly align the middle of a horizontal connector with the north point of a node below. I need to do more work amending the vertical spacing, but that can wait until my current problem is solved.

I am currently trying to construct a diagram of data flow that, in some cases, has two sets of data contributing to a single cleaned set of data. So this is a series of lines-between-two-nodes-on-the-same-horizontal-plane and vertical-arrow-to-outcome-dataset. This is in a chapter of my dissertation, with the chapter being called by

I know how to find the mid-point of the line between two nodes, e.g.

where the code specifies the mid-point of the line from which to draw.

But how do I position Below so I don't have to do some type of offset from TopLeft or TopRight? Currently I am doing this type of specification for `Below':

I'm spending a lot of time trying (and often failing) to get the north point of Below exactly below the mid-point defined in the line between TopLeft and TopRight. As you can see, I've been trying to wrangle this with below left and below right measurements. And these become incorrect every time I adjust the text in the box(es) above as it changes the relative positioning of the boxes. So I have the start of the arrow correctly positioned on the half-way point of the horizontal lines, I have the arrow correctly connecting to the north point of the node below, but I can't get the position of that latter node correct relative to the mid-point of the horizontal connecting line above it.

Basically, north should be on the same y-coordinate as the mid-point of the line connecting the two nodes above it.

I'm using a special document class, but this should work for any general Latex class. The boxes below will look weird because my real node text is much longer in every case.

Your flow chart you can draw on the following way: 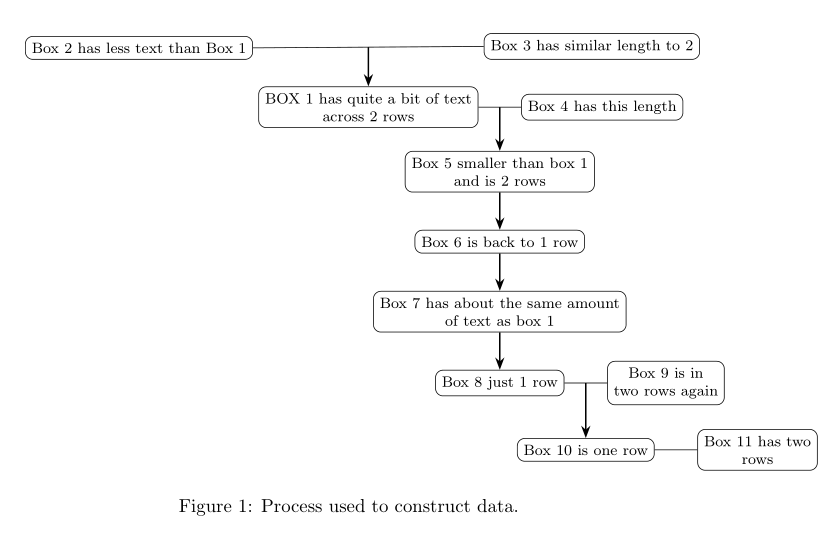 However, i would more prefer the following flowchart: 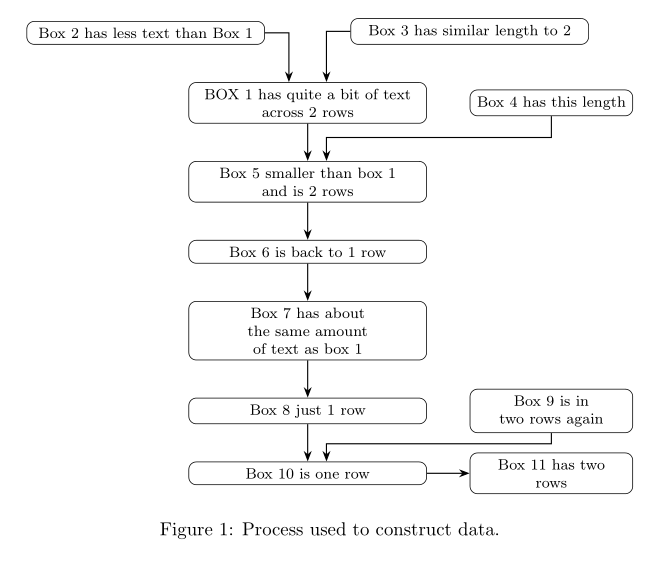 where are employed TikZ library chains and his macro join=by ...:

You can actually position a node below the calculated center of two other nodes:

18
tikz center node below 2 other nodes
3
How to position a node centered above two other nodes?

17
How to define the default vertical distance between nodes?
5
Computing the rectangle encompassing a node and a point
5
Placing a rectangular node in tikz by specifying two opposing corners
8
tikz: Draw rectangle with rounded corners only north/south?
5
Iteratively draw and connect nodes via `\foreach`
9
Multiples arrow branching out from a node to different nodes
3
Draw horizontal line up to rounded rectangle node in TikZ
5
How to create two arrow breaks?
4
Tikz: Connect chain of rectangles with lines
3
Arrow between BTrees