How to convert a latex document with Tikz/Pgf images and Latexmk into HTML?

I am hoping this is not a duplicate, but I was googling around so much that I can't remember where I started.

But I have a latex document that has some tikz and pgf images in it. I usually use latexmk to compile the file to pdf. Now, I wanted to see if I could compile this file to HTML, so that I can display the tikz images and such on the web. But I was not sure how to do this or what worked.

I tried to use make4ht, but that was only partially rendering my tikz images. Some of the macros that I had setup where not being rendered properly in the final output. The code I used was:

I also tried pandoc, and converting from latex --> markdown, and then from markdown --> HTML. This also did not render the tikz blocks correctly. I did add the --mathjax flags, but I don't think that mathjax supports tikz right now.

Can anyone suggest the best approach that they have found for converting tex documents with tikz diagrams into HTML webpages.

As per comments by @michel.ht I tried a different driver. That helped but I am still getting formatting issues with the output. I am posting a specific example of a simple neural network. Perhaps I need to change the way that the code is written to better fit the Tikz driver?

Here is the corresponding picture. The text in the nodes is missing like $x_1$, etc.

There are some other issues with some tikz macros, but I can work on those in a subsequent post.

Here is a modified version of your MWE that use the alternative TikZ driver for TeX4ht:

The \ifdefined\HCode condition is used in order to ensure that this driver is used only with TeX4ht. You don't want to use it in the PDF output. I had to define the \layersep macro, as it was undefined in your MWE. It is used for the node distance, so you may want to change it according to your needs. 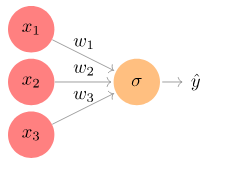 Not the answer you're looking for? Browse other questions tagged tikz-pgf pandoc latexmk html or ask your own question.

4
How to print or convert HTML document into PDF using LaTeX
1
How to convert HTML markup into LaTeX markup?
10
align, aligned and R Markdown
2
Convert a document using ebproof to HTML?
7
With pandoc, is it possible to export a bibliography in markdown?
0
is there a command line (or on-line) conversion tool bibtex to markdown (for large bibtex files)
6
Convert LaTeX to HTML with MathJax