Redefine \LaTeX command for referring to a glossary entry

To link every \LaTeX{} to the glossary, I could replace everytime I used the macro in the text with \gls{latex} but I found it more convenient redefining \LaTeX{}. Unfortunately, it does not work. When I use

Nothing happen. When I use

I got !TeX capacity exceeded, sorry [grouping levels=255] So I thought, I may need to avoid \LaTeX inside the glossary itself and added

But I still got the error:

we tell TeX that the macro \LaTeX should expand to \gls{latex}. So whenever TeX encounters \LaTeX, it will just try to use \gls{latex} instead.

\gls{latex} will end up printing \protect\LaTeX in many cases (amongst other things; the command does more). But now LaTeX sees the \LaTeX in \protect\LaTeX, expands it and sees that it expands to \gls{latex}. This results in the infinite loop you get.

The result is pretty much the same with

Here LaTeX doesn't define \LaTeX to be \gls{latex} directly. Instead it defines \LaTeX via an auxiliary macro that then expands to \gls{latex}. This just adds one further layer to our infinite loop, but does not change the end result.

We could avoid the issue if could copy the actual definition of \LaTeX and give it a different name. Then we could overwrite \LaTeX and define it in terms of our copy of \LaTeX. That way we get out of the infinite loop because no macro tries to expand itself.

That is the approach with \let\origLaTeX\LaTeX. Unfortunately, this does not work since \LaTeX is defined with \DeclareRobustCommand{\LaTeX}, which – as alluded to above – does not actually define \LaTeX directly, it defines it via a helper macro, which contains the actual definition. When we do \let\origLaTeX\LaTeX, TeX copies the definition of \LaTeX into \origLaTeX. But the helper macro that actually contains the definition of \LaTeX is not copied over or changed. Since we defined our new version of \LaTeX also with \DeclareRobustCommand{\LaTeX}{\gls{latex}}, \origLaTeX actually ends up calling \gls{latex} via the helper again.

Long story short, you cannot properly use \let with macros defined via \DeclareRobustCommandSometimes people get lucky and things appear to work, but this is not something you can rely on.. That's why the package letltxmacro was written. See also https://tex.stackexchange.com/a/47372/35864. With a current version of LaTeX, you won't need an extra package, you can use \NewCommandCopy to actually copy macro definitions without having to worry if the macro was defined with \newcommand or \DeclareRobustCommand.

works as desired and produces 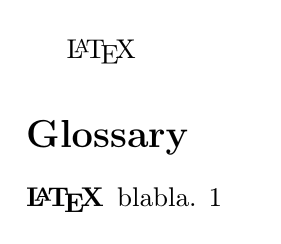 As I said in the comments I don't think there is a TeXnical reason why using \NewCommandCopy is not a particularly good idea here: It's just we'd change the definition of a LaTeX core macro to do something very different from its original definition. That can have unintended consequences when code you don't have control over uses that macro. Granted, for \LaTeX that probably is not much of a concern. But in general redefining core macros in a way that makes them do a whole lot more than before can be dangerous.

Not the answer you're looking for? Browse other questions tagged macros pdftex glossaries or ask your own question.

144
Can I redefine a command to contain itself?
5
Redefine macro in terms of old one