I would like to save the content of an environment to use later with a macro at several places.

Here is the real use case.

What has been typed is what the Lua code analyzes.

The code used in the environment looks like this.

Here is a starting MWE.

Due to the 30000-character-limit for answers I needed to split my answer in two parts.

This is part 2 of my answer.

Part 1 of my answer holds general explanations of the workings of TeX and of the code/working example provided in part 2.

Part 2 of my answer holds the working example. 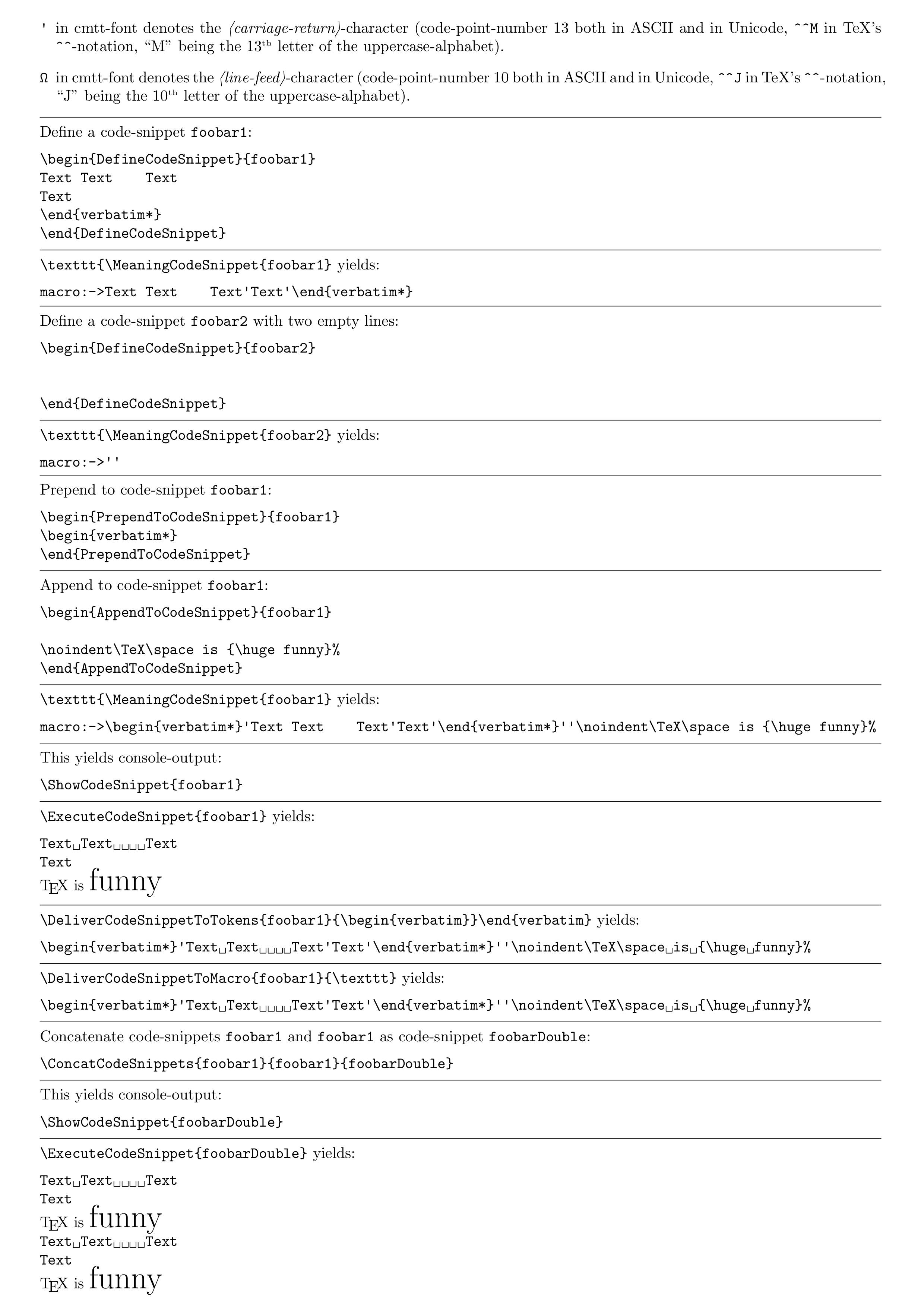 Due to the 30000-character-limit for answers I needed to split my answer in two parts.

This is part 1 of my answer.

Part 1 of my answer holds general explanations of the workings of TeX and of the code/working example provided in part 2.

Part 2 of my answer holds the working example.

You use the phrase "raw content" without clarifying what it shall mean/denote.

I can offer a generic interface \UD@GatherCodeSnippetLoop which switches to verbatim-catcode-régime (category codes of special characters ⟨space-character⟩, \, {, }, $, &, #, ^, _, %, ~ switched to 12(other)) and character by character reads from the .tex-input-file and tokenizes and accumulates things until encountering a character-sequence \end{⟨expansion of \@currenvir⟩}, applying \string to every accumulated non-space-character for transforming everything, e.g., characters usually active due to the package inputenc, to catcode 12(other). (Applying \string to non-space-character-tokens only is for the following reason: Space-characters already have category-code 12 due to the switching to verbatim-catcode-régime. Applying \string would transform them into explicit space-tokens of category code 10(space) as spaces/space-tokens are the only exception with \string: \string transforms everything but spaces to category code 12(other) and transforms every space to category code 10(space).  )

\UD@GatherCodeSnippetLoop can be used for defining different environments with differing behavior, having in common that the body of the environment is gathered from the .tex-input-file as a sequence of explicit character tokens of category code 12(other).

Such environments can be used for storing these sequences of explicit character tokens of category code 12(other) as macros.

, the trailing % being of catcode 12(other) as well so that it will be written by \scantokens' fake-writing without problems and be recognized by \scantokens' reading-back under its usual catcode 14(comment) whereby it then prevents the coming into being of a spurious token due to TeX's insertion of the endline-character.

In order to understand the reason for the latter you need to know about some details of how TeX works:

\scantokens processes a set of already tokenized tokens as follows:
First TeX fakes unexpanded-writing these tokens to external text file.
Then TeX uses that faked external file as souce of .tex-input (as if you had applied the \input-primitive for switching to another source of .tex-input) and reads/preprocesses/tokenizes/digests it outgoing from the catcode-régime which is current at the time of carrying out \scantokens.

In our situation the set of already tokenized tokens was tokenized under verbatim-catcode-régime, so that only (non-special) explicit character-tokens came into being, and each character-token was transformed to have category-code 12(other). This implies that the ⟨carriage-return⟩-characters, which—due to the above-mentioned \endlinechar-mechanism—were inserted at the ends of lines during the stage of pre-processing, got tokenized as (non-special) explicit character-tokens of category code 12(other) and character code 13.
Usually TeX writes such tokens to file in ^^-notation, i.e., instead of writing some combination of ⟨carriage-return⟩-characters and/or ⟨line-feed⟩-characters or whatever, the character-sequence ^, ^, M gets written, and characters written subsequently also end up in the same line.
If you want \scantokens' fake-writing to instead create a transition from one line to the next, you can either assign \newlinechar the value 13 right before applying \scantokens, or, remembering that the value of the \newlinechar-parameter usually denotes the ⟨line-feed⟩-character (10/^^J), you can have TeX replace each explicit catcode-12(other)-⟨carriage-return⟩-character-token by an explicit catcode-12(other)-⟨line-feed⟩-character-token before applying \scantokens.
I prefer the latter because it does not require changes of whatsoever parameters of TeX being in effect while \scantokens is carried out, in edge cases probably leading to behaviour deviating from what is considered the "usual thing".
( If you would let the fake-writing of \scantokens just write the sequence ^, ^, M instead of having the fake-writing-routine create a transition from one line to the next, inputting/reading/tokenizing/digesting/processing the fake-file under normal catcode-régime would be a problem: ^, ^, M would be taken for ^^M, i.e., for the ^^-notation of the ⟨carriage-return⟩-character. Under normal catcode-régime the ⟨carriage-return⟩-character has category code 5(end of line) which means that it causes TeX

yields the same as

Therefore you cannot preserve sequences of ⟨space⟩-characters that occur right at the ends of lines of .tex-input for re-processing by TeX (e.g. via \scantokens).

You can store your content in a savebox. Thus I added another parameter to your \calctree: the ID (note it requires a backslash). Then you invoke \usebox\ID to use the box.