Equivalent of \pdfsavepos for a box?

Suppose I typeset some text using an environment that places it in a box with a width that I specify. (I don't really care if this is a minipage, tabular, or something else.) I want to write the coordinates of the box to a file. (I will probably use xetex, because this involves Greek text, and that seems too painful in the other tex implementations I've tried.) In pdftex and its extensions such as xetex, I can use \pdfsavepos at the beginning and end of the text, and use write18 to write the coordinates. But I think this won't really give me the coordinates of the upper-left and lower-right coordinates of the box. I imagine it will record the positions of a point on the baseline (?) just before the first character and just after the last character.

Is there a way to output the actual coordinates of the box, or do I have to somehow estimate this by doing arithmetic based on the width of the box, the ascender and descender height of the font, and possibly the box/environment's margins? If I have to do the arithmetic muself, is there some convenient, automated way to find out the relevant font dimensions for whatever font is being typeset? 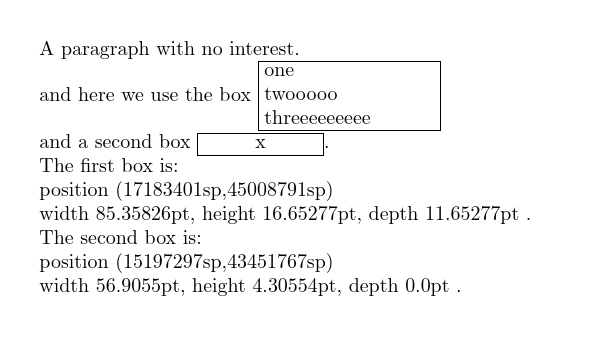 3
Horizontal braces with XeTeX take too much space
35
Definition of \strut explained
62
Fit text into given box by adjusting the fontsize
23
Non-invasive replacement for \fbox?
8
\setbox containing maths interferes with surrounding math mode in XeTeX
7
dynamic font size for hbox
6
Reflowing marginpars typeset using pdfsavepos
49
How can I specify a chain of fallback fonts in XeLaTeX?
5
What is ‘mapping’ and how can I use it to my advantage?
7
The concept of boxes in TeX