First occurrence of a command

I'm writing some macros that need to behave differently after first occurrence. I decided to use the etoolbox package's toggle. My MWE is as follows:

As an output I get the following: 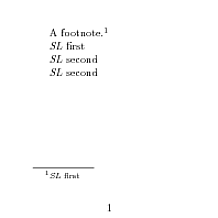 The problem, as you can see, is that when using the command in a footnote, the toggle does not occur. (Should the image not be clear enough, the footnote reads "1 SL first".)

What is going on in here? (I tried TeX's \newif with the same result, by the way.)

The solution is hidden in the package documentation:

This command [...] may be prefixed with \global.

The meaning of this is that usually \toggletrue will work locally, that is the setting is undone by the enclosing group. \footnote here defines a group. So you need to use

in your macro to make sure the switch is always set globally. 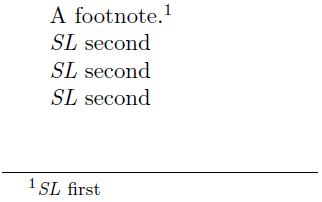 Not the answer you're looking for? Browse other questions tagged macros conditionals grouping or ask your own question.

4
How to check if it is the first time or last time a macro has been used in ConTeXt?

5
Gobble every occurrence of \mypath../
3
Why does defining a new command inside a framed block not work?
10
How to create command that creates new if command?
16
Numerical conditional within tikz keys?
4
Check for first occurrence of element in chapter
6
new command with cases?
8
Within command definition peek at next command
1
Highlight first occurrence of a reference or reference list in text
0
Optional Argument New Command
1
A group macro from a command