matlab2tikz - TeX out of memory

I am using matlab2tikz to import figures from MATLAB to tex.

However I quickly get the message TeX capacity exceeded, sorry [main memory size = 3000000].

I have tried expand main memory using instructions from http://docs.miktex.org/manual/runtimeparams.html using initexmf --edit-config-file=xelatex but that only opens an empty file!

I have also tried to use externalization functionality of pgfplots using instructions from its manual and also from Export eps figures from TikZ, but I've also failed (probably because I am using xetex and not pdflatex).

What should I do furhter?

Since I didn't have any luck with altering the TeX memory capacity, I had to find another way to solve my problem.

It was matlab2tikz that actually did the job. It has an option of downsampling the figures during the conversion to tikz-pgf. It is called minimumPointsDistance.

The final (downsampled) figures where absolutely indistinguishable from the original and MUCH, MUCH more light. Also note, that you don't have to downsample the figures in MATLAB yourself, but just set the minimumPointsDistance which only affects matlab2tikz's output code.

EDIT: This is an expansion of my answer. I apologise for getting out of the TeX limits, but this extension offers a better solution, so I believe it should be posted here. Now on the problem...

matlab2tikz's point reduction algorithm although fast and simple has a

It can distort certain "stiff" areas of the curve when the actual number of points kept drops very low. This is illustrated in the following picture 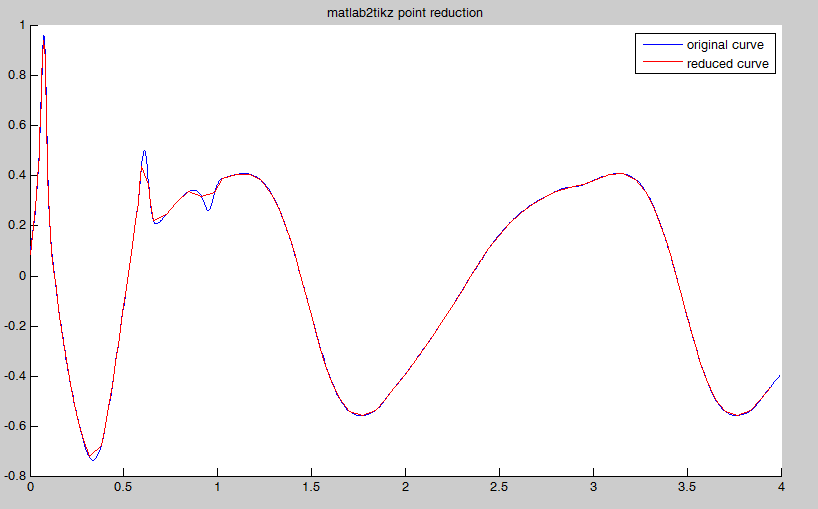 To deal with this and at the same time keep the number of points low I wrote a new point reduction algorithm which is much more effective (but can be slower sometimes). The results (red curve is 116 points) 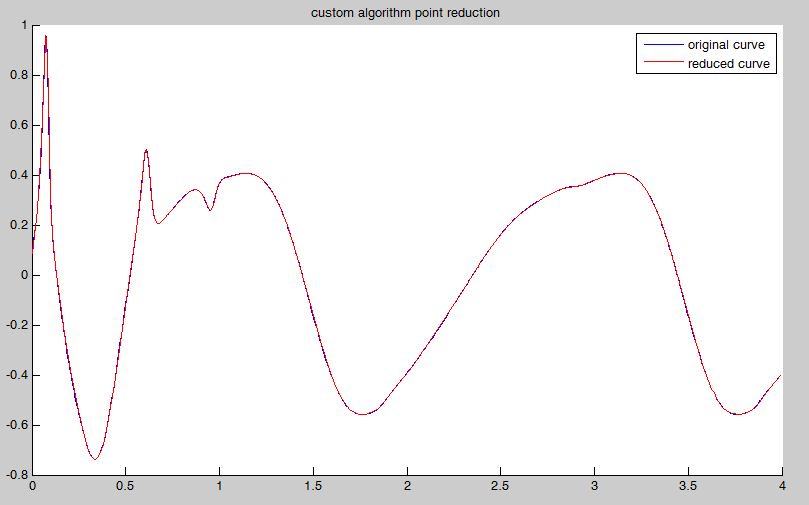 It is clear that the distortion is gone.

But there still is

that exists in both algorithms. When one converts a batch of figures to tikz, they usually want uniform quality for all reduced diagrams. But sometimes this is not possible (at least without extra effort) because typically minimumPointsDistance must be set differently for each one of the figures and the results actually depend on the size of the intervals [min_y, max_y] and [min_x, max_x] as well as the number of points in the figure.

So in order to overcome this problem and make minimumPointsDistance able to be set at a specific value uniformly for all figures, producing reduced versions of uniform quality, normalisation is used, and now minimumPointsDistance "internally" refers to the actual size of the printed-on-paper figure.

You can download the modified matlab2tikz.m file from here along with instructions.

NOTE that exhaustive tests were NOT made so be careful!

As nice and flawless the usage of such a plug-in can be, the TeX memory problems are quite annoying in the long run and I had them many times as well processing spectral data.

Another way to deal with it is to use LuaLaTeX as those memory restrictions do not apply here. Together with the externalize library from tikz, the finished pictures get converted into single PDF files. This makes subsequent compiling fast again.

I just found a simple solution today while using their latest version of matlab2tikz. Run the code in LuaLaTeX instead of pdfLaTeX. This solves the issues of

But I found a new problem on the same code which works on Mac. It did not run on (LuaLaTeX) Windows OS after the update of LaTeX. The error says

in this case, one can put the following two lines in the preamble

and run the code in LauLaTeX! Issue is explained here

Not the answer you're looking for? Browse other questions tagged pgfplots matlab memory or ask your own question.

54
Export eps figures from TikZ
20
Compiling a document with PGFplots processing only every x-th data point?
1
Memory error on writeLaTeX - Externalize or other solution to build dense plots docs
1
How to insert LTspice .plt plots?

16
How to export matlab figures to (pdf) LaTeX?
20
Increasing TeX's main memory
1
exceeding memory with tikz (even after externalise)
2
How to increase TeX main memory size