Putting numbered equations in the remaining space of the line

I would like to define a new equation environment that displays the equation inline, but with its number being displayed at the end of the line (without text between them).

Motivation: I am writing a document with some space constraints and I would be able to save a few lines by replacing some display-style centered equations with the above.

There have been quite a lot of questions on labeled inline equations, for example this one or this one, but my question is a bit different: I would like the equation number to be displayed at the end of the line so that it can be easily located.

Thank you in advance for your help!

With the following definition of equation-inline, the equation is displayed correctly but referencing to it doesn't work:

Although I disagree stylistically, this is how you could do it: 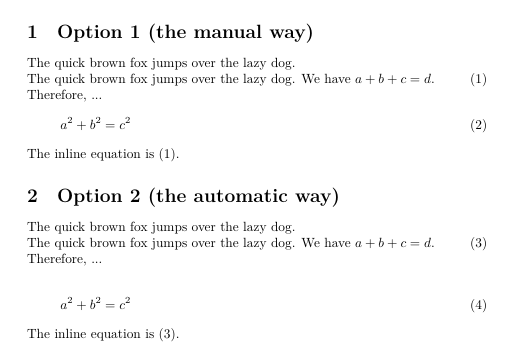 Credit for the right align code to this answer.

It can be done with the linegoal package, which measures the remaining space on a line (requires two compilations), and nccmath:

The following does the job:

Not the answer you're looking for? Browse other questions tagged numbering inline or ask your own question.

21
Labelled in-line equation
8
How to number an inline-math equation?
2
Pushing text to the end of the line