\hline not meeting at the vertical lines in the fbox

I am using the following code borrowed from here:

There are better ways to accomplish what you are attempting, but the \hline you invoke is for use in tabular environments, not in general text. Perhaps the closest thing, using that approach, would be the following.

As David noted, because an \fbox is padded, you have to subtract off the width of the padding and the lines from the \textwidth, for the size of your \parbox. Then, I used an \hrulefill instead of the improper \hline. However, that also needed to be left shifted by \fboxsep, and augmented in length by 2\fboxsep, so as to fill up the gaps on either side caused by the \fbox.

I propose two solutions using a simple code, based on the framed package: 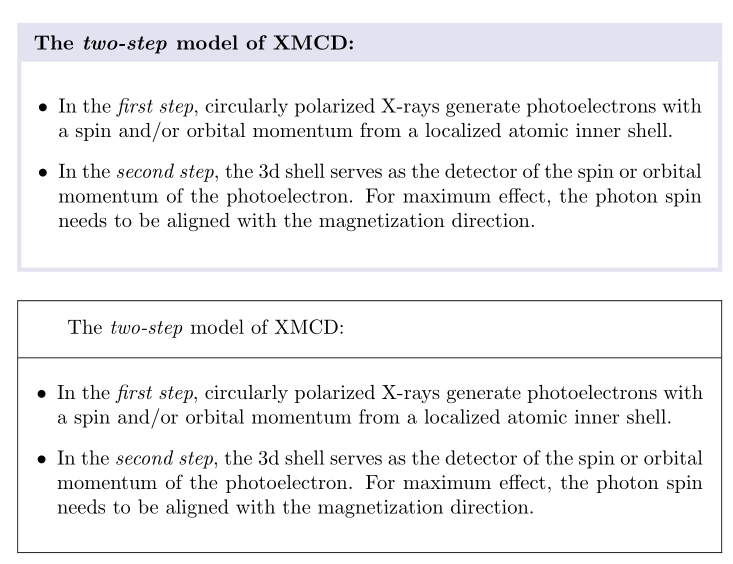 Not the answer you're looking for? Browse other questions tagged lists boxes or ask your own question.

3
Why does xcolor not like \fbox (or vice versa)?
3
Difficulty finding the vertical distances between two lines of content
3
Vertical alignment in tabular with fbox
2
\fbox does not work in \headebox baposter
3
Why can I not vsplit a parbox? (and fbox alignment, and unvbox syntax)
5
\vbox and vertical spacing between lines
4
List environment with vertical lines along nested lists
2
fbox does not produce the expected output
11
Bulleted list with vertical lines
4
How can I make a vertical rule that extends to the edges of an fbox?