siunitx allows us to print numbers, units and quantities, the later understood as a combination of numbers and units. For that we have, respectively, \num, \unit and \qty.

Using \qty{<number>}{<unit>} is not the same as just juxtaposing \num{<number>}\unit{<unit>}, since \qty takes care of proper spacing between number and unit, as per the option quantity-product. So far, so good.

However, I'd like to be able to split the number from the unit and still get the spacing from quantity-product. The use case is a table, where I'd like to use an S column, and pass the unit in the table's preamble to all numbers in the column.

Now, I know most everyone here will tell me I should not add the unit to each number but should rather just give it once in the table's header. I agree this is usually best practice. But I have a case where the header is already crammed, and the numbers and units are short, so I think my table would look better if I did it this way. So, regardless of table formatting best practices and taste, I'm looking for a technical solution for the situation.

The MWE below summarizes the situation:

The above example, of course, is missing the space between the numbers and the units in the second column. So I'm trying to get a, let's say, \qtyunit macro to use instead of \unit there.

I have tried a couple of alternatives, but I'm not really confident in or satisfied with either. The first one was:

This looks nice, and gets the job done. But I'm not really sure if I should rely on passing 1 as number with print-unity-mantissa=false actually printing the quantity-product. This seems very much as a side-effect, which might change (one could argue it should not be printed), and the effect is not documented.

(siunitx does allow to pass an empty number argument to \qty, but the case is treated specially, and quantity-product is skipped).

So I went to siunitx.sty and cooked (based on the definition of \unit):

But this, while it works, leaves me the sensation of being much overkill for this purpose.

So, the question is, am I missing something in siunitx from which I could get this in a more straightforward and robust way? If not, does anyone see an alternative which would be better than either of the two above?

Edit: I came up with a third alternative:

Looks promising, but it still feels like cheating somewhat.

In v3 there are a number of code-level interfaces that are used for communication between sub-modules, but which are not directly exposed as document commands. Here, you are really after \siunitx_quantity_print:nn, which prints a pre-formatted quantity and which will accept a missing numerical part. (This is needed for example in printing complex quantities.)

We first need to format the unit, then pass it to the printing routine.

In the example below, the contents of each cell in the second column is collected, using collcell package, then passed to \mynum as its argument (like \mynum{<cell contents>}).

That is, the spec for the second column 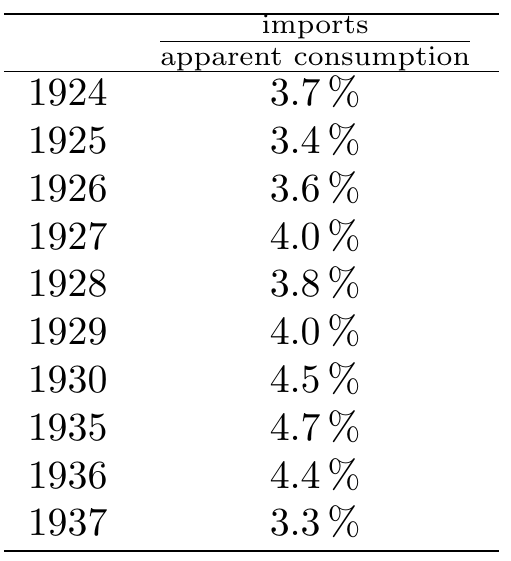 Not the answer you're looking for? Browse other questions tagged siunitx or ask your own question.

2
Spurious spaces in tabular environment with siunitx and percent symbol
7
Wrapper for siunitx' \SI macro to automatically split number and unit
2
siunitx produces number too big error with large numbers
8
How to globally ensure siunitx units are upright using a math font?
6
Numbers disappears with \rowcolor in siunitx table with tableformat=x.0
2
Control of space in columns of numbers with units in siunitx
2
How to have bold unit with Siunitx
4
Spacing problem with \usepackage{siunitx}